Our easy to use, free search service is focused on finding you premium business premises in Earl's Court at competitive rental prices. Our knowledgeable advisors are waiting to help you locate and secure the ideal business accommodation, from business centre space, collaborative and project spaces and shared office accommodation to individual workstations, unfurnished space, industrial units and virtual office solutions. We have an extensive portfolio of South London commercial property and if we don't currently have what you need we'll go out and find it! 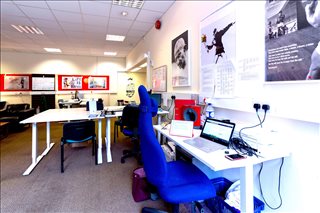 Providing a selection of contemporary coworking space and hot desking at affordable rates. Furnished to a high standard and benefiting from fully integrated communications and IT systems, dedicated reception personnel and disabled access. More info 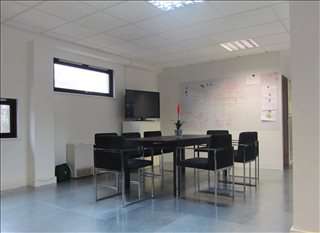 This property is a brand-new building and the office has only been occupied for a year. The West side of the office has floor-to-ceiling windows filling the working space with light. A kitchenette with dishwasher, microwave and fridge has been fitted. There is a separate partitioned office which can be used as a meeting room if necessary. The office is comes furnished with 12 open space desks/chairs but has room for 6 more desks with plenty... More info

Business is largely centred along Cromwell Road and Earl's Court Road in Earl's Court, a small district in Central London. Due to its location close to Kensington and its many museums and other tourist attractions, several hotels are based in the area. A number of hotels are also based close to the Earl's Court Exhibition Centre, one of the area's largest employers and major attractions until recently. Small retail shops as well as cafes and restaurants are also the main employers in Earl's Court.

The redevelopment of the Earl's Court Exhibition Centre site will likely transform the area with new residential developments. The addition of new commercial spaces will also help change business activity in Earl's Court.

Earl's Court's landmark office building is the Empress State Building, a triangular-shaped high-rise located next to the Earl's Court Exhibition Centre. Built between 1958 and 1961, the building was originally 100 metres or 329 feet tall and has 28 floors. It was briefly London's tallest commercial building until the construction of Millbank Tower in 1962. In 2003, three additional floors and 17.3 metres or 57 feet of height were added to the Empress State Building. The Metropolitan Police Service and the Mayor's Office for Policing and Crime are the building's main tenants. Plans in 2014 were approved to transform the building into 440 new homes, which would add approximately 580,000 square feet of new residential floor space to Earl's Court.

Earl's Court is a district within the Royal Borough of Kensington and Chelsea. It is bound by South Kensington in the east, West Kensington in the west, Kensington to the north, and Chelsea to the south. East Earl's Court is known for its expensive Georgian homes, while the west side of Earl's Court is more commercial in character with several theatres, restaurants and other entertainment destinations. Opened in 1937, the Earl's Court Exhibition Centre and its iconic Art Deco façade was one of London's premier conference and events venue. It was also the district's main draw until the centre closed in 2014. The redevelopment of the site will make way for a new residential and retail development in Earl's Court.