We have a wide range of flexible office spaces available to rent in Kensington, London, including private suites, shared desk space and serviced offices available at great rates with fantastic amenities. Click each individual office space listing for full details or call 020 3965 9617 to discuss available spaces in the Royal Borough of Kensington and Chelsea. 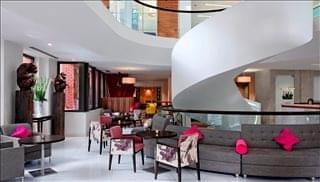 Surrounded by a... More info 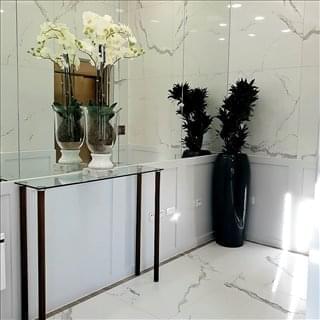 Based in the heart of the vibrant Kensington High Street, this centre consists of 14 private offices and 12 co-working spaces, as well as offering virtual office facilities. The centre boasts a wide range of amenities for tenants to take advantage of throughout their working day. With the workspace's meeting room facilities, tenants will be able to host clients or team meetings in a professional environment. Tenants can also benefit from... More info 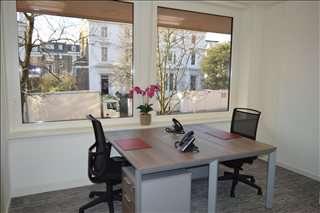 Offering serviced office space for rent on flexible terms, Niddry Lodge at 51 Holland Street has been refurbished to a Grade A standard, offering self-contained office accommodation as well as stylish serviced offices in a modern business centre. Office suites in a variety of sizes are available, catering to different business needs. There is also a full range of in-house services and well-designed communal areas at the centre, including a... More info 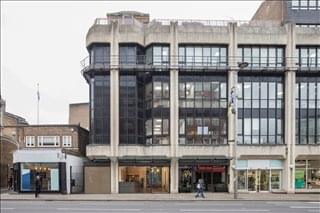 Located at 239 Kensington High Street, the building offers quick transport connections and fantastic amenities. Contemporary-styled spaces range from dedicated offices and part-time offices for occasional use. There are also day offices and coworking spaces at this tastefully decorated business centre.

A spectacular reception is staffed to guarantee a professional welcome and concierge services for tenants. In addition to a... More info 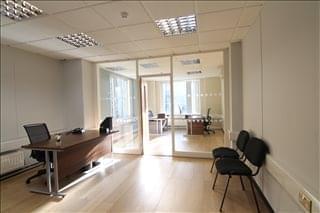 Offering a range of office space options, this thoughtfully restored period building is a beautiful example of the charm and character of London's Victorian architectural heritage. Benefiting from an elegantly designed reception area, perfect for greeting clients and business associates and four floors of beautifully decorated office suites each served by a lift. These fantastic offices are available in a variety of sizes and... More info

Looking for a great office space in a prime location? Our experts are on hand to help you find the perfect Kensington office space at cost effective prices. We have an extensive commercial property portfolio in West London, offering private office space, shared and coworking hubs, hot desking opportunities, and short term rentals on flexible terms.

Office Buildings to Rent in Kensington

The business and retail heart of the district is Kensington High Street, which is home to mainly upmarket shops. Many of the options for office space in this area are found along this popular retail strip, including 239 High Street Kensington, a modern office building that includes serviced facilities. This business centre, operated by Regus, provides tenants with access to several shared facilities, including a business lounge and meeting room.

Northcliffe House is another commercial building on Kensington High Street. The office building includes several shops at the Barkers Arcade and a Whole Foods location, which together form the Barkers of Kensington building. First opened in 1870, the building was used as a department store until 2006. Tenants include newspaper group DMGT, which has its head office at Northcliffe House. Other entities based in the building include The Independent, The Evening Standard and TV channel London Live.

Kensington is a densely populated district of the Royal Borough of Kensington and Chelsea in West London. Several notable cultural and tourist attractions are found within the district's borders, including Royal Albert Hall and the Albert Memorial, the Natural History Museum, the Design Museum, and the Science Museum. The Victoria and Albert Museum also sits on the western border with Kensington.

Kensington is an elegant and affluent district filled with opportunity, where shoppers looking for artisanal cheese and delicious pastries mix with tourists visiting one of the area's many cultural attractions and diplomats working in the area's consulates and embassies.

Some European diplomatic missions are based in Kensington, including the Irish Passport Office, the Consulate of Romania, the French Consulate and the French Embassy Cultural Department. Algeria, Bosnia and Herzegovina, Gabon, Iraq, Iran, Mauritius, Morocco, Thailand, Vietnam, Yemen and Zambia are among the countries with embassies or other diplomatic offices in Kensington.

Tourism and culture is also a major employer in the district given the presence of some of London's most important museums. Education is also a major sector in the area, with various colleges and schools providing higher education to individuals from all corners of the globe.