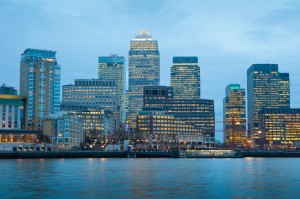 Buildings in London are often named after its design, such as The Shard in reference to its resemblance to shards of glass. Alternatively, many towers are named after their location or address to highlight a prestigious location such as One Canada Square. In some instances, office towers in London have been named after major tenants.

The innovative Lloyd’s Building is often referred to informally as the Inside-Out Building. The office tower is home to insurance firm Lloyd’s of London, which owns and lends its name to the building’s name. The Lloyd’s Building was constructed on the site of the East India House on Lime Street, which once served as the London headquarters of the East India Company. Completed in 1986, the modern structure was designed by Richard Rogers and features electrical power conduits, water pipes, staircases and lifts on the outside. It also integrates elements from the original Lloyd’s building, including an eighteenth century dining room and early nineteenth century entrance that were moved from the previous Leadenhall Street location. The Shell Centre on the South Bank of the River Thames is also named after its main tenant. Completed in 1961, the office tower was the first to exceed the height of the Victoria Tower at the Palace of Westminster. The building was commissioned by oil giant Shell, which commissioned its construction. Other buildings named after corporations include the Willis Building, which is named after its main occupant, the Willis Group. Located opposite the Lloyd’s Building on Lime Street and completed in 2008, the tower features an elegant stepped design resembling the shell of a crustacean.

While the Lloyd’s Building, the Shell Centre and the Willis Building are officially known by their main tenants’ company name since it was built, other office buildings in London have adopted commercial names after they were completed. The Salesforce Tower London was known as the Heron Tower when it was completed in 2011. London’s third tallest building after The Shard and One Canada Square, the tower is located on Bishopsgate in the City of London. In 2014, the tower was renamed after U.S. global cloud computing company Salesforce.com. Although it is officially named after one of the building’s major tenants, the building continues to be referred to as the Heron Tower. Despite these names, the tower’s official name remains 110 Bishopsgate, allowing other tenants to use a neutral name on their company documents and correspondence.

Operators of certain towers such as the Heron Tower have sought corporate naming rights in order to secure much-needed investments to sustain operations. At the same time, others have lost corporate-inspired names. Tower 42 was originally known as the 183-metre National Westminster Tower when it was constructed as the home of the international division of the National Westminster Bank (NatWest). Located on Old Broad Street, the building was even designed to incorporate the design of the bank’s chevron logo. After the building was refurbished following the 1993 Bishopsgate bombing by the Provisional Irish Republican Army, NatWest decided not to reoccupy the tower and it was renamed to the International Financial Centre before it was sold. The name now refers to the building’s 42 cantilevered floors. Similarly, 30 St Mary Axe was previously known as the Swiss Re Building. Also known as the Gherkin, the iconic skyscraper was originally named after the building’s primary occupant, Swiss Re, before it was sold in 2007. It is now named after its location in the City.

Changes in ownership have often meant a change in a building’s name, as seen with 30 St Mary Axe and Tower 42. Others have had their names evolve with their primary tenants or owners. The BT Tower is a communications and office tower in Fitzrovia. At various times in its history it has been known as the Post Office Tower, the London Telecom Tower and the British Telecom Tower. Completed in 1964, the tower was originally commissioned by the General Post Office. St. Helen’s has been renamed several times since it was completed in 1969. The modernist-style building was first commissioned by the Commercial Union Assurance Company and was known as the Commercial Union Building. As Commercial Union evolved into Norwich Union and eventually Aviva in 2009, the office tower’s name has also changed. Most recently it was known as Aviva Tower, although St. Helen’s continues to be the home of Aviva’s headquarters.

Naming office buildings for a particular company has been seen in London since the 1960s when the first skyscrapers began to dot the city’s skyline. Many companies that commission buildings will often name the tower after themselves. In other cases, naming rights may be sold by a building’s owner in order to raise funds. In most cases, having a building named after a company helps to enhance name recognition and promotes the particular business.