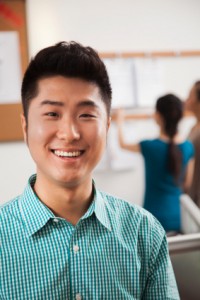 Continued from the Four Office Personality Types: The Fussy Perfectionist.

The Nice Guy or Girl is simply … well, nice! He or she is the one that welcomed you first when you started to work for the company, and who volunteered to show you around and tried to make you feel comfortable. You can spot the Nice Guy or Nice Girl a mile away, as their office desks are often decorated with pictures of peaceful landscapes and friendly family pictures. They might also be into yoga, massage, reiki, and every single alternative therapy that you know of (and some others that you don’t know of too). Nothing will make the Nice Guy or Girl happier than you accepting their invitation to join them in a yoga class. Seriously.

The Nice Guy or Girl speaks softly and tends to be an introvert, even though they talk to and try to get along with pretty much everyone. And here’s the thing: in most cases, the Nice Guy or Girl does not really want to do that, but he or she feels that they MUST. Nice Guys / Girls have a problem with conflict, and they will do absolutely everything that there is in their hands to avoid it. If that means being nice to co-workers whom they actually really hate, then so be it. What this means is that it is really difficult to get to know the real Nice Guy or Girl, as they are basically and essentially people pleasers.

Because of that, this office character will have a hard time making decisions or casting their vote. To them, staff meetings are a dreadful event for the most part, so don’t even think about putting them on the spot and asking their opinion directly. Most of the times they will side with the boss, but then their conscience will bother them and will try to make amends … in their own way.

Of course there are good points about working with the Nice Guy or Girl. They are often very reliable colleagues who will go out of their way if you need a favour. If you need a shoulder to cry on or someone to confide in, you may feel naturally drawn to them. They are also great people to work with on a team project, as they will pull their weight and help everyone else meet their objectives and deadlines (just so that no conflict arises, of course!).

And yes, we all wish we had a Nice Guy or Girl as a boss, but for some strange reason that does not happen too often.

Next week: The Climber