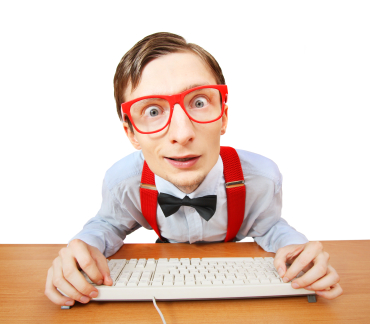 Continued from the Four Office Personality Types: The Climber

The Geek is one of the most harmless personality types that you will come across in your workplace. There is a simple reason for this too: The Geek lives in his or her own world (although they would probably call it cloud, pun intended), and that world is far removed from the daily occurrences of the average office.

However, and as much as The Geek often goes unnoticed, you simply cannot fail to identify them. It is true that the geek stereotype includes large retro glasses and an absent-minded look, but don’t be fooled by the lack of 70s-inspired eyewear: you will recognise The Geek by its desk. The Geek’s desk looks different because it IS different: every single component and piece of equipment has been optimised and modified so that they are better (which in this case means geekier). The Geek tends to love his or her job (as long as there is a computer involved), so they try to make their work space as comfortable as possible. In a way, The Geek is a toned-down version of The Fussy Perfectionist, and they both seem to share a secret understanding and acceptance about each other’s quirks.

You can expect to find incredibly ergonomic office furniture at The Geek’s desk, which will be strategically placed so that they have easy access to all their gadgets. If there are no rules against it, The Geek will put together a multi-screen set up and will be very excited to tell you all about it. Admittedly, it all looks pretty cool, as The Geek will make sure that he has the newest, rarest, and sleekest of all gadgets, from computer keyboards to multi USB ports (because there are never enough devices that you can connect together!).

Often, The Geek will have rather obscure passions, most likely involving science fiction, gadgets, comic books, or words (that’s right, there is a Geek variation that is mostly passionate about grammar and everything related to it). The Geek can be quite good in terms of social skills, although deep down he is not impressed with the lack of geekiness of fellow co-workers. On the other hand, The Geek is a born problem solver and a pragmatist, and that is good news for everyone in the office. When something breaks down, chances are that they will be able to fix it, and the best thing is that they will just love doing it and showcasing their true geeky skills.