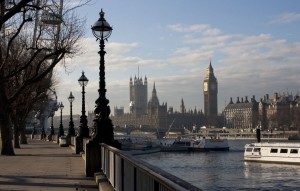 As one of the world’s most visited cities, London is not short of tourist attractions. Of course, different people visit the British capital for different reasons: shopping, business, and nights out are some of the most common. Whichever the reason that brings you to London, make sure you do not miss out on the city’s most iconic landmarks.

The Big Ben is the London landmark par excellence. This famous clock has been depicted in movies, stamps, postcards, printed on T-shirts, mugs, keyrings, and all sorts of souvenirs. Rather paradoxically, as famous as the Big Ben is, the origin of its name is unclear, as some believe that the clock tower was named after one of the engineers involved in its construction, while others think that the clock took its name from a boxing champion. Not many people know that the clock was actually designed by a lawyer who was only interested in clockmaking as a hobby.

The Big Ben has been punctually marking the hours with its characteristic chime since 1859, except for the war years and for some brief malfunctions. The clock sits at the top of the 315-feet tall Gothic tower known as the Elizabeth Tower, which is only open to UK residents who book their visit in advance (although if you are planning on doing this you must keep in mind that you will need to go up 334 steps in order to reach the top).

Buckingham palace has been the official residence of British queens and kings since it was first built in 1705. The palace is one of the London landmarks that has taken longer to be completed, as this royal venue was not officially finished until 1962. The palace is built over the Tyburn river and on the site of a former medieval village, called Eye Cross. When the village was abandoned in the beginning of the 17th century, the site was turned into a mulberry garden. George III built the estate in 1761 (which contained Buckingham House, the oldest building in the palace complex), paying what today would be £3 million.

Buckingham Palace’s interior is as luxurious as one would expect from a royal residence, as it is decorated with antique tapestries, marble statues, and stunning period furniture. Parts of the palace are open to the public during the summer months.

Over its 119 years of existence, Tower Bridge has been the backdrop to countless photographs. This iconic suspension bridge over the River Thames is a Grade I listed construction and as such, part of the British heritage. The bridge was built to facilitate trade with the then up-and-coming East End of London, while allowing ships that navigated to river to continue its journey downstream towards the port of London.

Tower Bridge is open to pedestrian and motor traffic, and one of its walkways is home to an exhibition that tells the story of the bridge. The Bridge has been witness to several curious incidents, such as protests by Spiderman-clad demonstrators.

Covent Garden has been a fruit and vegetable market since the 17th century. However, the area earned a reputation as a red light district a century later, and town planners were called in to come up with a solution. Covent Garden’s central building was constructed in 1830 in order to attract trade and to do away with any disreputable business. During the six years between 1974 and 1980, Covent Garden was not actually in Covent Garden, but in Battersea.

Today, Covent Garden is more than a fresh produce market, as it is home to the world’s largest Apple store and to some unique fashion, jewellery, and antiques boutiques. The area is also a prime eating and drinking spot.

In just thirteen years since its inauguration, the London Eye has positioned itself as the UK’s most visited paid tourist attraction, with more than 3.5 million visitors every year. At 443 feet, the Eye is the world’s third tallest wheel of its kind. The London Eye has 32 passenger cabins, which double as observation decks. This number is not random, as it represents each of the capital’s boroughs.

The wheel was built as part of the urban regeneration project that gave a facelift to London’s South Bank, although the London Eye is not London’s first Ferris wheel. The Great Wheel, which stood at Earl’s Court between 1895 and 1907, can be considered the prototype used in the design of the London Eye.

As its name suggests, South Bank is the 2-mile long area immediately south of the River Thames. Despite its proximity to areas like Westminster and the City of London, the South Bank was always rather different, and it went from being an entertainment centre in the Middle Ages to becoming an industrial ground later on. However, developers realised the potential of this area as early as in the 1920s, although it was only towards the end of the 1980s that a walkway and a riverside park were built.

Nowadays, the South Bank is still being regenerated, but the area has already become London’s waterfront and a leading centre for cultural and creative activities, where visitors can enjoy theatres, street art, first-class accommodation options, and other London landmarks, like the London Eye or the Aquarium.