When it comes to working in the city, life is rarely dull. From the constantly busy atmosphere through to working locations, London’s business sector is an exciting place for workers of all ages to be. In recent years, more and more companies have begun using famous landmarks as their office buildings of choice. For those who work in them, going to work comes with the simple pleasure of sitting in a building with historic significance, day after day. 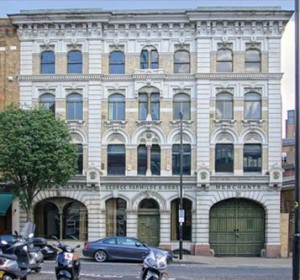 The Batman Building in Clerkenwell
Sat in the heart of Clerkenwell is a building known as ‘The Batman Building’. In addition to finding fame for its role in Gotham City, this mid-19th-century glass and leadworks outfit is owned by the Farmiloe family, which was the original family to commission it. In addition to featuring in Batman, it has been snapped up by the producers of Inception and Sherlock Holmes.

Although this Clerkenwell building has continued to be popular amongst movie directors, the owners have since chosen to turn it into offices, targeting multinational corporations like Amazon. While those working for everyday small and medium businesses might not get a look in, the lucky few who do work for multinational corporations in the area may find themselves travelling to Gotham City on a daily basis for their 9 to 5 job. 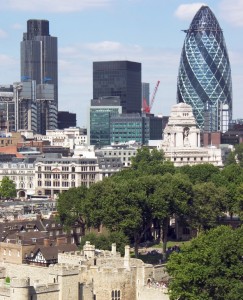 The Gherkin
To the rest of the UK the Gherkin is well-known for its role in the business world. When it comes to visitors, however, it is a towering landmark that they’ll forever associate with London’s skyline. As a commercial skyscraper that sits in the heart of London’s financial district, the Gherkin is home to hundreds of city workers, who spend most of their days and weeks toying with the financial market from within its glass walls.

For those who don’t work in the city, the Gherkin presents an excellent opportunity to grab a bite to eat. At the top there is a restaurant, which offers one of the city’s best panoramic views. Those who walk into to play with the stock market may benefit from its luxurious surroundings on a daily basis, but everyday people can enjoy the views without so many city stresses. 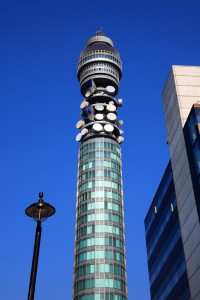 The London Telecom Tower
Also known as ‘The BT Tower’, the London Telecom Tower was arguably the Gherkin of the 1960s. While it now fades into the city’s background a little, it is still well-known amongst those who live there. The tower was built in the 1960s to transmit high frequency waves, and was the first purpose built building in the city of its kind.

In addition to being the home of British Telecom workers, the tower now hosts Post Office workers. Until recently, its status as an official government building meant that it was illegal for passers by to take photographs of it. Without meaning to, hundreds of tourists have snapped the London Telecom Tower over the years, unaware that they’re breaching the Official Secrets Act.

The Historic Royal Palaces
From Hampton Court on the outskirts of London through to the Tower of London in the city centre, the Historic Royal Palaces has taken hold of some of the city’s most beautiful buildings and turned them into offices. While there was once a time when members of the upper classes and European royal families would stay in Hampton Court’s spare rooms, today they serve as offices for those who work there. In addition to hosting Hampton Court’s workers, they also serve as an administrative hub for those who work for the organisation as a whole.

Step into the city and there is the Tower of London, which is one of the city’s busiest attractions. With a busy atmosphere comes plenty of admin, and so the rooms that once held some of Britain’s most notorious criminals and persecuted royals play host to admin staff. On the odd occasion, those who want to break into the world of history and conservation find themselves grabbing an internship there.

London is home to some of the world’s biggest businesses. While the majority of them house their employees in everyday buildings, a lucky few get to spend their time within the walls of beautiful structures.

Looking for office space? We may not be able to offer you the Tower of London but we do have listed and period buildings with office space available in selected locations throughout London. Give us a call to find out more.