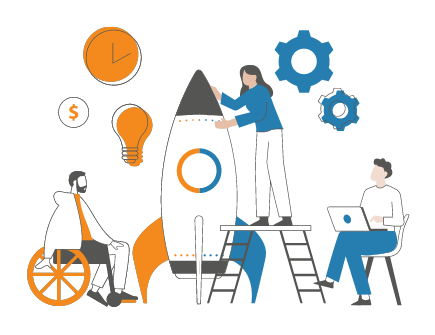 Following on from our recent articles exploring the ways in which UK office workers feel about their return to the workplace after the COVID-19 pandemic, we once again polled 450 individuals to determine how employees feel about the managers and bosses orchestrating a shift back into the office.

The questions presented by this poll asked respondents to give a general indication of how supported they’ve felt by management since returning to the workplace and outline whether they currently feel positive, negative, or neutral about their employer. 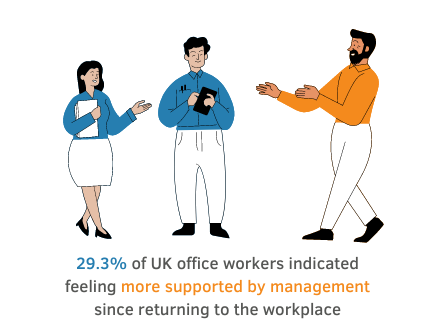 To be exact, 29.3% of UK office workers who responded to our poll outlined this belief. That such a large proportion of employees feel valued and supported in coming back to work is probably a good sign that management are working to retain staff through more humanistic means, making them feel more secure in their return. It would be nice to assume that the motivations for this increased support were completely centred around providing the best experience for the worker, but it’s likely that this change has occurred in no small part due to the increased number of businesses looking to attract quality talent and the favourable bargaining position of the worker.

Industry heads led the chorus as demand for skilled employees in post-COVID Britain reached a crescendo in September 2021, when employee feedback made it abundantly obvious that the slow march back to the office was a much more grudging one. Office workers came to a collective realisation that they held the power when negotiating for additional perks or benefits with their employer, buoyed by the fact that many businesses remained productive despite having their entire workforce work remotely. Armed with the proven success of remote work and digital collaboration, office workers began to become bolder with their demands.

When it came to satisfying these demands, large firms that were desperate to attract top talent led the way, establishing a new status quo typified by previously unseen offerings – such as sizeable sign-on bonuses, employee recognition programs, improved mental health support, flexible schedules, highly competitive salary packages, and a wide range of additional perks designed to bolster job satisfaction. This dramatic shift set the tone for numerous other businesses looking to coax experienced workers or promising graduates, resulting in a working environment that now offers more benefits and flexibility than ever before. That a third of returning office workers feel more supported by their managers is therefore not surprising, given the current emphasis being placed on making employees feel valued across the UK. 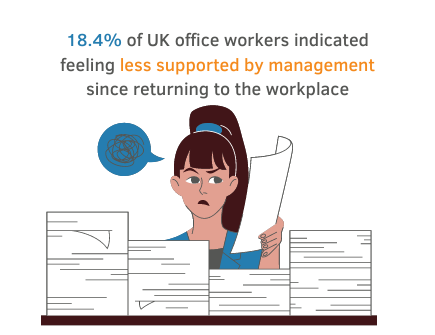 However, not all respondents painted a picture of improved managerial support

The fact that 18.4% of UK office workers polled (close to one-in-five) indicated feeling less supported by management since returning to the office serves as a strong reminder that not all employees benefitted from an expansion of benefits. Whilst those belonging to industries where skills are in high demand have undoubtedly benefitted in a post-pandemic environment, many other office workers have been thrust back into their traditional working lives after being given a taste of the flexibility provided by remote work.

This reality can be, at least partially, to blame for the number of employees who stated that they felt less supported, as managers who remain unsupportive of long-term flexibility have garnered a less than enthusiastic response from their workers. As the post-pandemic working environment continues to shift and grow in its infancy, having only really been established towards the middle of 2021, many leadership and management structures remain set in their ways. Expect to see these holdouts slowly begin to change their tune, as employees signal their desire for more change by resigning to pursue roles offering flexibility and a better work-life balance. It will take time for some businesses to find their bearings in this changed working climate, however, we ultimately expect the number of employees feeling less supported by management to dwindle as leaders become more aligned with the importance of making individuals feel valued at work and providing a supporting work environment. 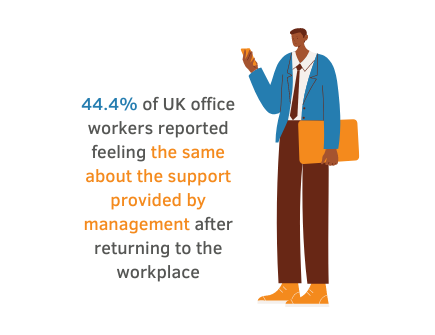 This was largely a surprise to us, as we had expected that there would be more polarising opinions surrounding the current state of management in the post-pandemic workplace. However, the fact that 44.4% of UK office workers stated that they feel about the same when it comes to the support provided by management after returning to the office paints a different picture entirely.

It should be noted that no change in feelings definitely doesn’t serve as a red flag for the current state of managerial support in the UK, considering the fact that many office workers would’ve already felt adequately supported prior to returning to the office. Assuming that at least half of these respondents were already happy with the support provided by their managers, when combined with the contingent who feel more supported, we’re presented with a sizeable majority who are currently happy with the support being provided by management.

One potential explanation for this result is the fact that many UK businesses heavily invested in additional support for the employees throughout the pandemic, leaving minimal changes to occur when shifting back to the workplace. On the other hand, this could be a result of UK office workers paying little mind to the support provided by their managers, as some businesses have continued to run with a laissez-faire approach that they adopted throughout the pandemic. 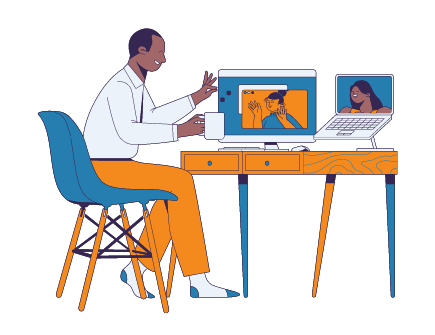 But what of those who still haven’t returned to the office?

In 2022, the amount of people working remotely in the UK sits at roughly 30% of the total working population. That only 7.8% of UK office workers polled stated that they haven’t returned to their office spaces is likely indicative of the proportion of UK remote workers that is made up of employees who were previously in-office prior to the pandemic.

This figure differs quite markedly from our previous study on workers returning to the workplace – which found that 13.1% hadn’t returned to the office. This disparity is probably due to the 13.1% of workers in our previous study counting partial re-commencement of in-person work as a return to the workplace, with the lower number of 7.8% representing those who remain fully-remote. 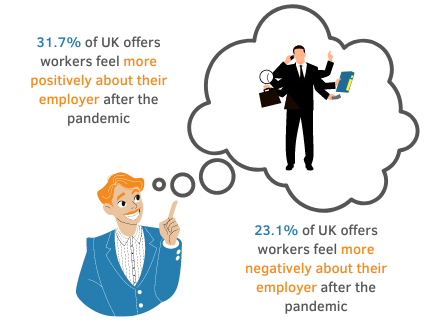 Enough about the managers! How do UK office workers feel about their employers after returning to the office?

As a slight addendum, and to hopefully provide a grounding effect from some of the more surprising previous findings, we also decided to ask respondents if they feel more positively, negatively, or about the same in regard to their employer (whether that be a singular boss or the overarching executive suite). The aim of this was to draw a comparison between the way that UK office workers feel about their direct managers and the company owners or executives that sit at the top of the totem pole. It’s also important to note that for some respondents, such as those in smaller companies, these people are one and the same.

Interestingly, 45.1% of respondents indicated that they feel about the same about their employer now when compared to pre-pandemic, a number that echoes the 44.4% who said they felt the same about the support provided by management since returning to the workplace. This result serves as a positive reflection on employers, and their abilities to handle the transition back to in-office work, since the drastic whiplash of returning to the office needed to be handled with great care in order to be considered even partially smooth.

Connections could also be seen in the 31.8% of respondents who outlined a more positive attitude about their employers, who aligned closely to the 29.3% that felt more supported by management after their return to the workplace. On the other hand, variance was seen in those who were less pleased, with 23.1% of UK office workers indicating that they feel more negatively about their employer, close to 5% more than those who felt less supported by management. This discrepancy might be tied to employees being hesitant to place blame on middle management, instead focusing on the inability of executives and owners to provide a suitable post-pandemic support system. A lot of UK workers are savvy enough to differentiate between decisions passed down from above and those directly formulated by managers — with actions tied to professional development, growth opportunities, employee appreciation, and the cultivation of strong company culture — often requiring some form of executive sign-off. 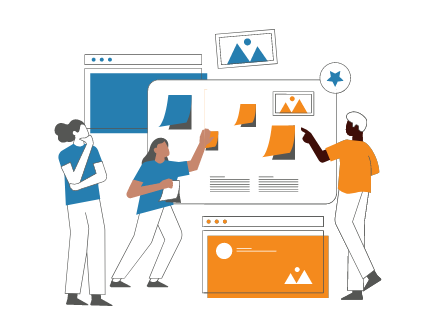 Finishing on a note of optimism

Despite the obvious influence of the post-pandemic working status quo, the fact that almost half of workers feel neither more positive, nor negative, about their employer since returning to work speaks well to management’s ability to seamlessly handle a transition back to the office.

The fact that so many respondents perceived an uneventful return, facilitated by the positive feedback provided to management’s adoption of multiple new employee expectations, goes to show that the shock of returning to the office might not be as significant as predicted by pundits. Instead of flooding employers with negative feedback regarding a return to the workplace, the vast majority of employees are utilising their bargaining power to have discussions with higher-ups about ways to improve employee experience and business performance. These conversations are, more often than not, resulting in increased job satisfaction and overall employee engagement, serving to improve retention rates in the long run.

When taken as a total, 76.9% of UK office workers polled indicated feeling either more positively or about the same about their employer after coming back to the office, a great sign that business leaders are well adept at managing transitions out of global economic disruptions at the scale of COVID-19. This also goes to show the resiliency of workers in times of upheaval, as well as their general willingness to express their expectations and desires in the current, more employee-focused, jobs market.

For more deep dives into workplace statistics and general office insights, you can visit:
UK Office Workers Polled: Characteristics of a Good Manager
Most Desired Employee Perks for UK Office Workers (2022 Poll)
How Do UK Office Workers Rate Their Return to the Office?
55% of UK Office Workers Favour Hybrid Working, Will the Office Ever Be the Same?
London Office Market Sees Highest Level of Occupier Activity Since Before the Pandemic
How to Deal with the Stress of Returning to the Office after a Long Layoff
10 Ways to Improve Office Morale
An Overview of Coworking Spaces in London
How to Value a Commercial Property and Determine Rent in London