Following a year of exceptionally strong returns on commercial property, the London market has started 2015 dominated by optimistic rental growth prospects and by changing occupier trends. 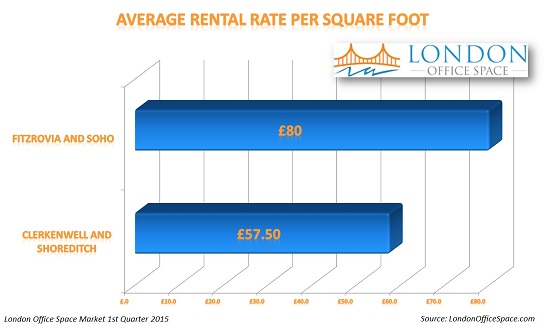 According to market analysts at Savills, activity levels began to accelerate in February across all commercial sub-sectors, being consistent with the trends observed during the past six months. London’s established reputation as a global hub for businesses in the knowledge economy has brought about an increase in the amount of funding devoted to research and development (over £1.5 billion a year according to the most recent data). This fact has had a clear effect on the London commercial property market, which continues to provide support to new startups and relocating businesses. In turn, this has prompted changing occupier trends. Companies who operate in the knowledge-intensive sector have begun to look for properties beyond the Tech City and other areas that traditionally had a strong presence of media and knowledge companies (such as Soho and London Bridge). New clusters have emerged in Stratford, Tottenham, and New Cross. These areas increasingly cater to the property requirements of small and medium-sized businesses, which made up 47% of all transactions during the first quarter of the year. The current floor space supply is set at 6.7 million square feet and vacancy rates average 6.9 per cent. The top rents achieved during this quarter reached £70 per square foot. 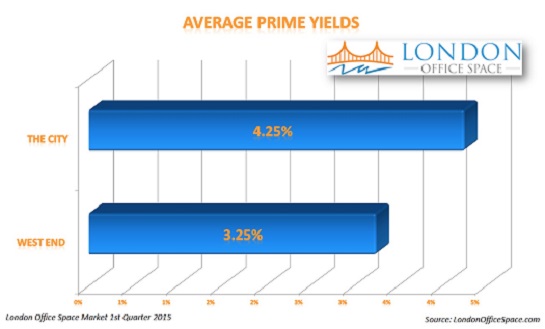 Availability has come under pressure due to the large number of commercial-to-residential conversions and to the significant level of commercial property being held as long-term assets. This is particularly the case in high-value areas like St James or Mayfair, where up to 80 per cent of the office floor space is locked up by investors.

On the positive side, we can highlight the successful redevelopment of the King’s Cross – Euston corridor, also known as the Knowledge Quarter. Here, more than 350,000 square feet of commercial floor space have been taken up in a single transaction, the sub-lease of 6 Pancras Square. According to GVA Research, prime office properties in Camden and King’s Cross have experienced large increases in rental values, driving occupiers out and towards nearby locations like Clerkenwell and Shoreditch, where rents average £57.50/sq ft. Rents in Midtown range between £62.5 and £72.5/ sq ft.

In the West End, a sub-market traditionally occupied by companies in the media and creative industries, rents have reached average values of £80/sq ft in Fitzrovia and Soho, although asking prices remain as high as £107.50/sq ft in other West End areas. In East London there has been high demand for co-working space from the TMT sector, especially in and around Old Street and in the EC2V postcode. Also in East London there have been 22,000 square feet of loft office space released at Dept W, a Whitechapel-based development that aims to attract occupiers in the creative and media sectors. The office development pipeline currently concentrates around Olympic Park, a very attractive location for digital, advanced manufacturing, and life sciences occupiers. Overall, prime office rental values could increase by 6 per cent over the next two quarters, whereas rental growth in secondary locations is expected to remain stable.

As for the office investment market, Savills Research reports that during February 2015 alone more than £160 million were poured into the market through seven large transactions, which involved the acquisition of office floor space in 1 Mabledon Place, 42-60 Kensington High Street, and 100 Knightsbridge, among others. Average prime yields 3.25 per cent for offices in the West End and 4.25 per cent in the City.

Improved consumer confidence has brought about rising footfall levels, which have been particularly significant in out-of-town / Greater London areas. A 2 per cent increase in footfall levels was observed between December 2014 and February 2015, and this has pushed rental values upwards. Recent research released by Knight Frank and IPD shows that retail rental values have finally begun to show some solid growth, and particularly in the luxury rental market, whose rental values have increased by 4.2 per cent when compared to Q1 2014. Average asking prices remain among the world’s highest in Mayfair and Bond Street (£1,350/sq ft) and are consistently high in Regent Street (£650), and Oxford Street (£950).

According to Savills Research, retail yields have not experienced any significant changes and currently stand at 2.5 per cent for prime properties and at 3.5 per cent for non-prime properties. Continued investment in commercial properties devoted to leisure and hospitality has been a key trend during the past three months. This sector has experienced a rise of 10% in activity levels and is expected to continue rising during the remainder of 2015.