The neighbourhood of Mayfair is one of London’s most prestigious addresses. Embassies, five-star hotels, exclusive boutiques, and some of the capital’s most expensive real estate can all be found here. Over the years, the area has been home to some notable residents, like Alexander Graham Bell, Jimmy Hendrix, Oscar Wilde, and even Queen Elizabeth. If you are interested in finding out more about this area of London, this article provides a good introduction to the history of Mayfair and a guide to some of its most iconic landmarks. 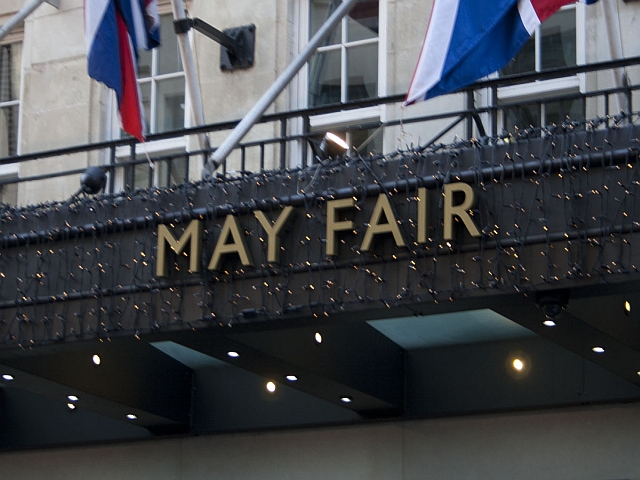 Mayfair’s past history: from agricultural land to thriving commercial hub

The history of Mayfair can be traced back to the beginning of the 17th century. At that time, the area consisted primarily of a vast expanse of agricultural fields that were watered by the River Tyburn, which today still flows under London’s West End and Buckingham Palace. The site was chosen as the venue for the celebration of the annual May Fair, which took place during the first two weeks of May, and which provided an opportunity for nearby villagers to acquire livestock and fresh produce, as well as to entertain themselves with gambling, jugglers, and puppeteer shows.

However, it seems that during the festivities things tended to get a bit out of hand, and neighbours (including some royals) complained about the boisterous character of the fair and asked for it to be moved elsewhere. The fair saw its last edition in 1709, and from then onwards Mayfair was the name given to a mostly residential area that was home to some of the wealthiest estates of the country, including Grosvenor Estate, Burlington Estate, and Berkeley Estate.

During the 19th century, Mayfair became an important centre for commerce and shopping. The Royal Arcade was inaugurated in 1879 and still serves its purpose to this day. The business potential of this area attracted many property developers, who built large mansions and hotels that helped raise the profile of Mayfair. Today, Mayfair and is a hive of upscale commercial activity, and one of the most exclusive postcodes of the British capital. In fact, this London neighbourhood commands some of the highest rents, not only in London, but also at international level, as weekly rents of £70,000 are not unusual in the area.

The Mayfair enjoys a privileged location surrounded by some of London’s most exclusive landmarks, such as Buckingham Palace, Knightsbridge, and Green Park. Prior to becoming a luxury hotel back in 1927, the building had been the official London residence of the Duke of Devonshire. The hotel’s suites are regularly occupied by renowned artists, and the Mayfair is also home to the famous Nobu restaurant, where celebrity sightings are a common occurrence. The hotel is also known for its exclusive cigar room and for its fantastic cocktail and cupcake menu.

This 5-star hotel has been a favourite among royalty and celebrities from all over Europe since the very beginning. The hotel’s current facade dates from 1898, and this stunning Art Déco building is a listed property. Claridge’s spa, fitness room, and health club are open to non-guests on a membership basis.

Claridge’s is also the place to have a high tea in London, and its acclaimed wine dinners are totally worthy experiences too. As if all of the above wasn’t enough, the hotel’s main restaurant is managed by celebrity chef Gordon Ramsay.

Originally founded by a Newcastle family, Fenwick is one of the oldest independent retailers in the United Kingdon. The Mayfair Fenwick department store, located on 63 New Bond Street, opened its doors in 1891, and has since been a favourite among shoppers. Here you can find fashion items by the leading British designers, as well as jewellery, cosmetics, and home accessories, all of the highest quality. Fenwick’s two cafés and its main restaurant are a very fashionable spot to enjoy a brunch or an afternoon tea.

Grosvenor Square was built following orders of the Duke of Westminster, who owned the 100-acre estate of the same name in Mayfair since 1700. The houses that surround the square are characterised by their imposing architecture, and they have been the home of many aristocrats over the decades. Although most of the original mansions have now been demolished and replaced by apartment buildings in Georgian style, the central garden has been preserved and turned into a public park. The Embassy of the United States has been based at Grosvenor Square since the 1960s, and it is housed in a Grade II listed building.

Originally an 18th-century burial ground, Mount Street Gardens were later developed into a public green space in the northern edge of Mayfair. The gardens outlook has changed very little since they were first built in 1889, and today Mount Street Gardens offer a pleasant spot to enjoy a quiet afternoon reading or simply enjoying the peaceful atmosphere.

Further information on important London landmarks, areas and buildings including the Shard Building, the London Wall Buildings and popular tours of London.