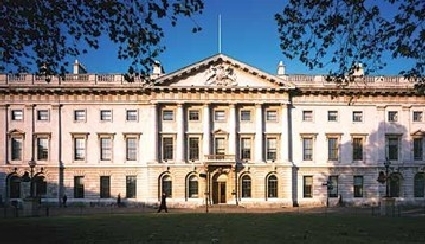 On Royal Mint Street, opposite the Tower of London, stands the Royal Mint Court building. It is Grade II listed, recently repurposed for commercial means and blends classic architecture with contemporary style and function. The site was originally home to a Cisterian Abbey from the 14th to the 16th Century; St Mary De Grace was sometimes affectionately called Eastminster Abbey, belying its architectural and historical significance. Later, in 1562, after the dissolution of the monasteries, the Royal Navy took over and used the site as a victualling yard. Following this, it changed hands again in 1784, when a tobacco company used it to store their goods.

Sir Isaac Newton was Master of The Royal Mint from 1699 to 1727 and during that time, The Mint was still housed, as it had been for 500 years, at the Tower of London. As the minting process became mechanised throughout the eighteenth century, a new building was commissioned by King George III on the site of the tobacco warehouse opposite, to the east. A committee was appointed, two architects were chosen, James Johnson and Robert Smirke and construction began in 1807. James Johnson died in 1807 and never saw the new building finished but Robert Smirke saw it through to completion and then went on to receive plaudits for his design of the British Museum. Part of Royal Mint Court is still called the Johnson Smirke Building in their memory. The Royal Mint Court remained the home of the minting process until 1975, with the introduction of decimalisation when the procedure was moved to Wales.

The Barclays Bank Executive Board operated out of the Johnson Smirke Building at No 4 Royal Mint Court from 1988 to 2000 after which Landmark PLC, a high quality office rental company, took it over and refurbished the interior.

The building sits on the north side of Tower Bridge, across from the Tower of London and Tower Hill tube station, which is served by the Circle and District lines. Even closer in proximity is Tower Gateway DLR station; both are within 3 minutes walk. For National Rail services, Fenchurch Street Station is 5 minutes walk away and within 10 minutes is Liverpool Street Station for the Central, Circle, Hammersmith and City and Metropolitan lines.