As one of the world’s leading commercial and economic powerhouses, the city of London attracts thousands of entrepreneurs and investors every year. According to a recent report, in the Tech City alone more than 15,000 new businesses were established during 2013, and this has prompted a surge in the demand for adequate office premises in this London neighbourhood. There are many other areas of London that are also experiencing a growing shortage of office floor space, mainly those in the northern city fringe area and in central London, where new developments are severely limited.

The decreasing availability of office space in sought-after areas has a clear effect on rental values, pushing average costs higher and higher. As a result, companies that have a limited budget have been increasingly turning to serviced office space, as this is a convenient and more affordable alternative. It is expected that during 2015 we will see increased demand for this type of floor space, and this trend may continue until several significant new office developments are delivered in 2017.

Several research reports on this issue have been recently published, providing a more detailed account of the key trends that will affect the serviced office space market in London during 2015. For example, a special interest paper published by The City of London gives us some interesting insights into this market. The paper shows that the London serviced office market has tripled since 1995, and that by the end of 2015 it is expected that its size will exceed 2 million square feet that will accommodate over 2,500 companies (70 per cent of which are SMEs). 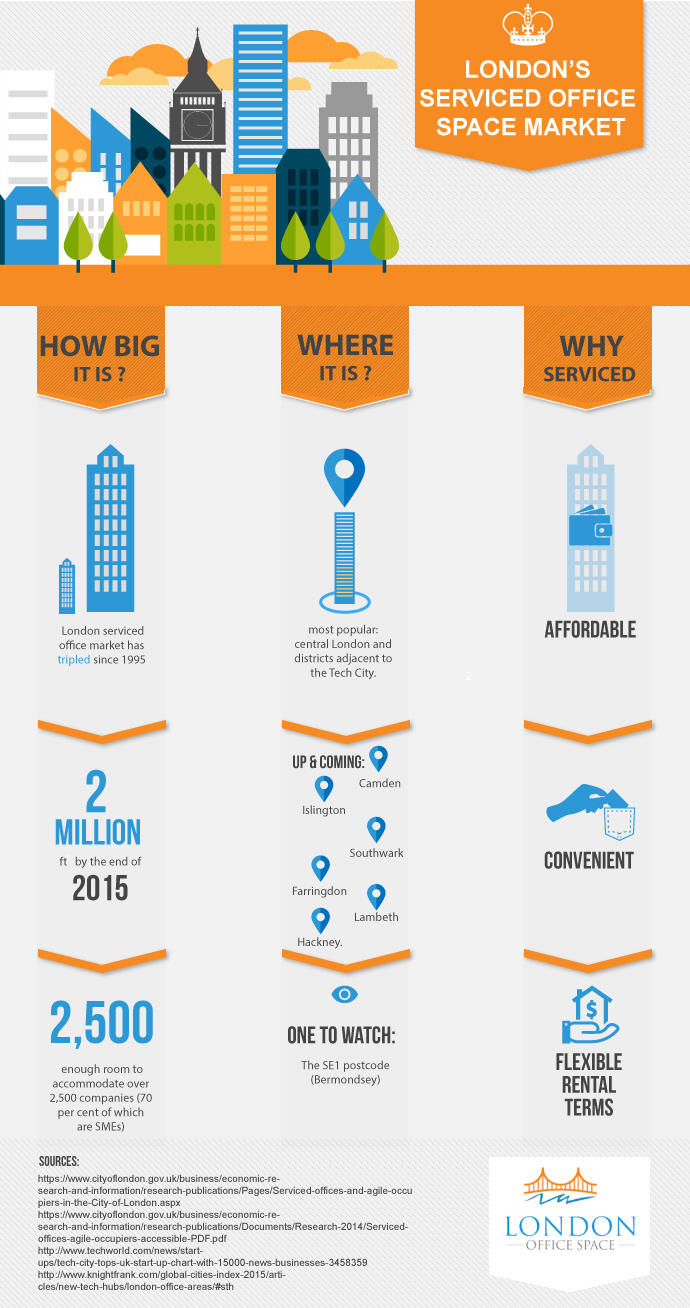 With regards to location, the most popular areas are central London and districts adjacent to the Tech City. However, an important number of serviced offices are expected to appear in areas like Camden, Islington, Southwark, Farringdon, Lambeth, and Hackney. The SE1 postcode (Bermondsey) is also set to become a popular location for serviced office space, mainly due to the lower rents and to its excellent transport links with central London. Flexible and shared office space will become increasingly popular in the Tech City (Shoreditch) and city fringe areas.

The report also highlights that contrary to popular belief, serviced offices are not just a temporary solution for start-ups. One of the most attractive features of this kind of office space involves flexible rental terms, and the most popular options are contracts lasting between 18 and 24 months, although many occupiers choose to stay long after they have become established businesses. Rental contracts that involve a 3 to 5-year term are not uncommon.

As for costs, workstations in central London range between £550 and £700, and these include state-of-the-art ICT infrastructure and support services. This year, we can expect prices to become closer to those of short conventional leases, although this should not necessarily affect the market in a negative way, as occupiers still value flexible terms (easy in, easy out) and the possibility of upsizing or downsizing when required. Price increases are more likely to affect small units (1 to 5 workstations) and large units (those with more than 10 workstations).

Overall, we can expect that during 2015 the serviced office market will continue an expansionary trend that will not be limited to central London locations.