Take a look at our serviced offices in Camden, available to rent on flexible terms, including executive suites and furnished private offices benefiting from a full service package. We also have coworking space and shared workspace, conventional commercial property, meeting rooms, desk rental, warehouse space, and short term space to rent with easy in/easy out options, as well as virtual office opportunities. Our easy to use, London private offices and workspace search service is focused on finding you the ideal business accommodation at competitive rates. 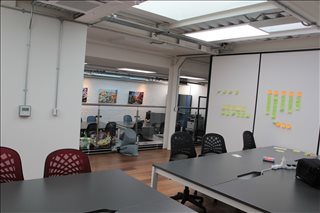 Corporate chic styled office space to rent, set in a quiet mews 5 mins walk from Camden town in central London, this centre is a place for entrepreneurs to come together and work within a premium, laid-back environment. The centre boasts meeting rooms (for up to 16), fast Wi Fi, a breakout area, beverages, a fantastic onsite team, a range of networking events and lovely common areas to mix up your working environment. Private offices come... More info 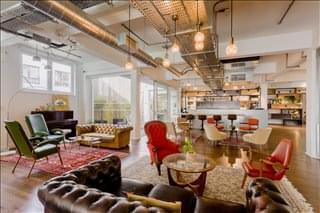 When deciding to start or move your business to NW London, you'd be wise to consider looking at serviced offices and coworking spaces to rent in Camden Town and the wider Camden area. It's well known for the famous Camden markets, general plethora of retail, dining and shopping options, as well as its arts and music scene.

With approximately 24,400 businesses, Camden is home to the second largest concentration of businesses in London after Westminster. The cultural and creative industries sector alone has 3,700 businesses and employs around 40,600 people, or 16 percent of all jobs in the borough. Business service firms including advertising, real estate, and consultancies represent half of all businesses in Camden and account for more than a third of local jobs.

The Camden area is very well catered to by an array of transport links, including the Camden Road station, Camden Town station on the Northern Line, Mornington Crescent, Caledonian Road station, Chalk Farm station and Kentish Town tube stations are all within easy reach. Euston Mainline Railway station is a 15 minute walk away, and the area is well served by numerous bus routes.

Examples of office spaces in Fitzrovia include:

Located in the northern part of London, Camden stretches from Holborn and Bloomsbury in the south to Hampstead Heath in the north. The borough is nestled between the City of Westminster and the City of London to the south, Brent in the west, Islington in the east, and Barnet and Haringey to the north. The British Library, Euston Station, King's Cross Station and St Pancras International are also located within the borough's borders.

Other attractions in Camden include the Bloomsbury Theatre, the BT Tower, Camden Market, Buck Street Market, Dominion Theatre, Freud Museum, Lincoln's Inn, The Roundhouse, Shaftesbury Theatre, and the London Zoo. The borough's districts and neighbourhood include Camden Town, which is known for its alternative culture and markets. Others include Bloomsbury, Holborn, Kings Cross, and Primrose Hill. Parts of the West End, Fitzrovia and Covent Garden are also within Camden.