Paddington is an ideal Central London office location with London Paddington station bringing thousands of commuters and tourists into the area each day. Our experts are on hand to help you find the perfect Paddington office space at cost effective prices. We have an extensive commercial property portfolio of West London offices to rent, including private serviced office suites, shared and coworking space, hot desking opportunities, managed office spaces, virtual office services other commercial properties for rent in Paddington. 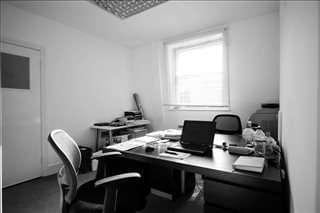 This appealing period property is home to a fantastic selection of bright and airy office accommodation, perfect for small or medium sized companies. Offered completely furnished, with office, meeting room,and lounge areas all furnished to a remarkable standard, meeting all of your business requirements, along with IT and communications infrastructure.

The area is hosts to numerous retail and dining establishments, along with... More info 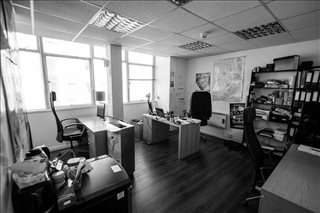 The workspace options are private offices for 2 to 20 people less than a 5 minute walk from London Paddington and Lancaster Gate stations. More info 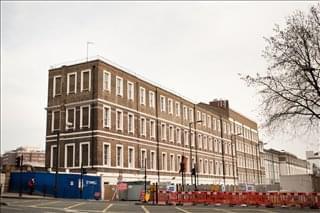 A fine example of a traditional period building's interior sympathetically updated to modern requirements, the serviced offices and coworking space available in this four storey Grade 1 listed building come in various sizes depending on your needs.

Access your new office in Paddington from its address at 19 Eastbourne Terrace, London W2 as well as from inside London Paddington station itself. The centre offers a host of services... More info

Bright, private office space by Paddington Station, with 24 hour access and a large newly installed kitchen with eat in break out area. You will have access to five large meeting rooms, a large reception area and the space has lots of natural light. Mews views from the private office. No street noise due to double glazing. Bathrooms, kitchen and meeting rooms finished to a high standard. Definitely worth a visit! More info 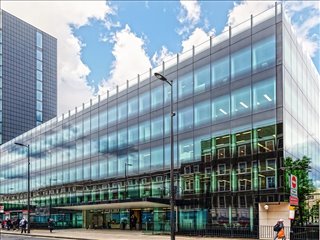 This fantastic state-of-the-art office space has been recently refurbished to Grade A standard. When members enter this space they will be greeted by a stylish reception area that will impress clients and colleagues alike. This space has a sleek and stylish interior design and features raised floors, suspended metal tiled ceiling, and LED lighting. In addition, 45 bike racks are available as well as showering facilities for those cycling to... More info 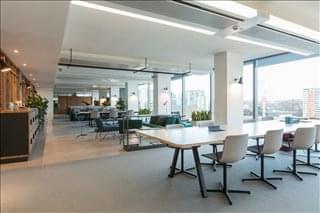 Part of a redevelopment that has transformed three 1960s-era office blocks, the commercial property at 20 Eastbourne Terrace is a stunning glass tower with Grade A offices in Paddington's transport hub. The private and shared office spaces here are designed to maximise natural light and promote healthy workplaces. 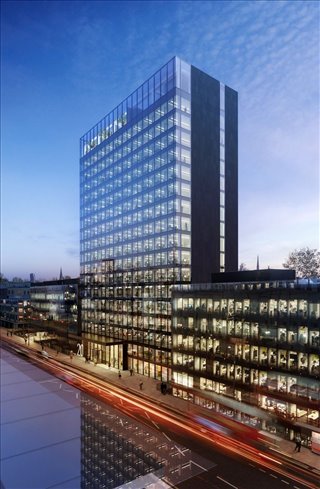 Situated in an award-winning, glass-front building that spans over an impressive 17-storeys. This space has been designed to boost creativity and productivity. This environment is bright, airy, and spacious, providing people with plenty of room to work. People will be greeted by a large, open, business lounge on the ground floor, the ideal place to network and collaborate with like-minded individuals. This flexible office space also boasts... More info 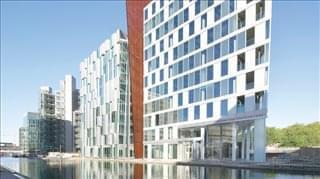 Opening in May 2019, this new development is based in the heart of Paddington, offers high quality, premium-finished space for business of all kinds. The centre has space ranging from a single one-person hot desk up to 500+ spaces for corporations. Workspace is designed to harness a positive and productive atmosphere, highlighted by spaces having floor-to-ceiling windows, bringing in swathes of natural light. On top of this, many larger... More info 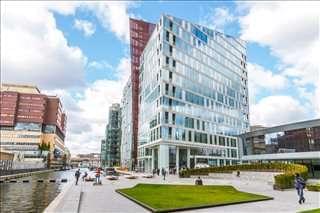 Five Merchant Square, Paddington W2 is a stunning modern building with 262,000 sq ft of Grade A office accommodation over 15 floors. Private suites and shared offices in various sizes are available alongside desk space and virtual offices.

Designed by award-winning architects Mossession & Partners, Five Merchant Square is at the heart of an 11-acre managed mixed-use development that is a home or workplace to some 10,000 people. A... More info 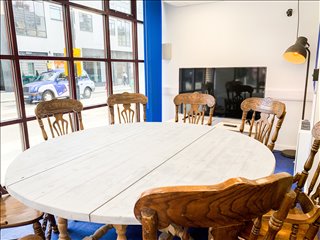 This Paddington-based space is an exciting proposition for start-ups looking a for a vibrant and supportive environment to flourish as a business. The centre has an abundance of space options, from hot desking to a fixed desk set-up or private offices ranging from 3-person to 16-person. The space can accommodate start-ups in any stage of development and provides services such as large format printing facilities (ideal for marketing... More info 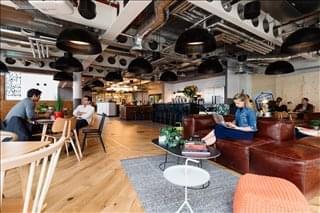 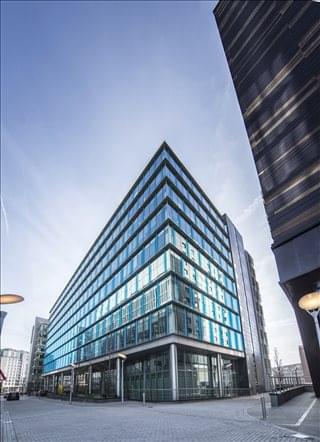 Serviced office solutions in this business centre at One Kingdom Street, Paddington W2 include dedicated office suites as well as part-time and day offices for occasional use. The centre also has spacious meeting rooms and high-speed internet access, and benefits from on-site car parking. 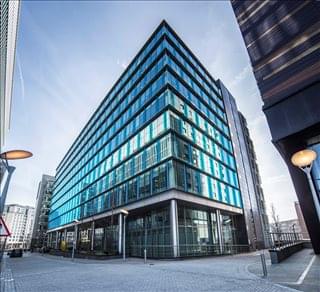 The serviced offices and meeting rooms are located on the sixth floor of a stunning building with excellent light and is close to every amenity. The offices are fully serviced so all you need to do is turn up and work. The centre has an impressive atrium, a staffed reception along with five easy to book meeting rooms. Paddington Central is a thriving business neighborhood which is ideal for networking, and members have the flexibility of... More info 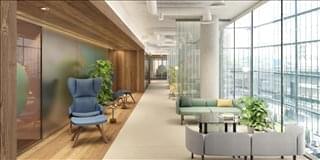 Opening soon, this space is just a stone's throw from Paddington station and has been designed in such a way as to maximise natural light to create a bright, airy and ultimately productive atmosphere. Tenants can take in stunning views across West London and the workspace is accessed via the stunning reception and lobby space, which is complete with an onsite cafÃ© â€“ making sure you're never short of caffeine. Other amenities... More info 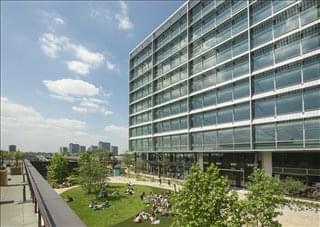 Want to work in the trendiest workplace in central London? With an on-site basketball (London's highest!), private corner terraces and a roof terrace, come and join the latest movement in flexible office space! Over 9 floors and 138,000sq ft of space, featuring flexible floorplates for you to maximise options for your working environment, this building is ideal for any ambitious business looking to thrive, grow and expand. With an... More info

View the Paddington serviced offices available above to find furnished office space for rent with inclusive pricing, covering rent, business rates and facilities. If you're looking for coworking space in Paddington we can help you find suitable shared workspace and desk rental.

In addition to the currently available office rentals listed, we are also able to offer serviced offices to rent in Paddington, London and throughout the W2 postcode area. Fill in the Quick Quotes form or call now to speak to a West London office rentals expert 020 3965 9617.

Why You Should Rent Office Space in Paddington

Paddington is within the City of Westminster, and itself was a metropolitan borough until the area was integrated into Westminster in 1965. It is nestled between Marylebone to the east and Bayswater to the west and is within easy walking distance of such well known Central London landmarks as Hyde Park and Marble Arch. The area is known for its Georgian homes and public squares, as well as independent shops and corner cafes and, of course, for its incredible transport links.

The London Paddington train / underground station is by far the area's most famous landmark, as well as an important economic driver and employer and a part of the Paddington Opportunity Area. London Paddington station brings thousands of commuters and tourists into the area each day and is a major railway terminus and London Underground station complex. Trains link Paddington with Bath, Bristol, Cardiff, Exeter, Reading, and other destinations. The Heathrow Express rail service also operates from Paddington.

Paddington station opened in 1854, replacing a temporary station that had been in operation since 1838. It is famous for the children's story Paddington Bear, who emigrated to England through Paddington Station on his journey from Peru. Other landmarks include St Mary's Hospital and Paddington Green Police Station, which is a major high-security police station.