Our experts are on hand to help you find the perfect office space in the Euston area of London - at a cost effective price. We have an extensive commercial property portfolio in North Central London, offering private serviced office space, shared workspaces, hot desking opportunities, and short term rentals on flexible terms. 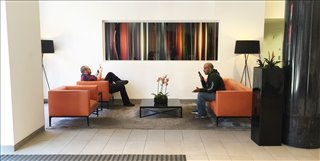 This centre is an exciting opportunity for a large business who wants a bespoke service. The space is a totally private, self-contained wing of a Central London Art Deco building which is fully customisable. The work space can be created to your own requirements, providing breakout areas, kitchen facilities, meeting rooms and telecoms exactly as you desire. The centre benefits from fully accessible raised floors and high-speed connectivity... More info 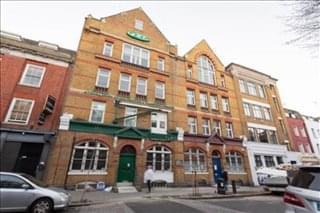 Opened in October 2019, this outstanding office space in Euston is not one to be missed. Located in an urban warehouse between Euston station and King's Cross St Pancras International, these serviced offices are in an area oozing with British history. Tenants can benefit from a wealth of amazing features, including; a stylish lounge with bar area, showers, bike storage, access to meeting rooms, an abundance of natural light and air... More info 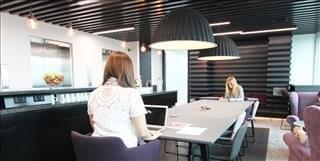 A total of 22,000 sq ft of shared and serviced offices are offered at this high spec centre at Evergreen House North, Grafton Place in NW Central London. With all inclusive pricing, these serviced offices to rent in Euston come with a range of amenities including meeting rooms, break out areas, high speed internet, bike racks and great transport links. Additional features include plenty of natural light, lovely roof terrace views over... More info 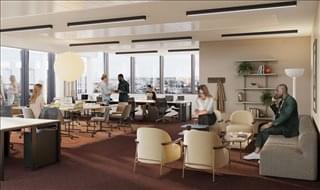 This brand new, beautiful Euston Road workspace has wellness and sustainability at the core of its serviced private office, coworking and meeting room offerings - with natural floorings of timber and cork materials, energy efficient light sensors and innovative insulation to create lasting purpose. Clients benefit from the comfortable and spacious communal lounge areas, focus booths, an on-site cafe, library and bar, as well as the 18... More info

The selection of office spaces listed above are available for rent on short term flexible per person per month contracts. These offices for rent in the Euston area are often housed in contemporary business centres within Art Deco or Georgian style building façades, and feature an exhaustive selection of facilities and services, as well as the option for furnished or unfurnished bespoke serviced offices, so you can leave your mark on your workspace with your business' own branding. Often included are staffed receptions, admin support, high speed internet and Wi Fi, professional meeting rooms, central heating and air conditioning, car parking, kitchens facilities, break out areas, private phone booths, bike racks, and bike storage, end of trip shower facilities and 24 hour access. Much of the shared new office space and private offices even come in buildings with a roof terrace and open plan pet friendly accommodations.

If you're looking for a Euston coworking space we can help you find shared workspaces and desk rentals in the area. Fill in the Quick Quotes form or call us on 020 3965 9617 to speak to one of our experts about the shared and serviced office spaces available to rent in Euston and throughout North London.

One of the area's largest office developments is One Euston Square. Located at 40 Melton Street, the building was completed in 1980 and built opposite Euston station. In addition to offices that come in a range of shapes and sizes, tenants have access to reception services, meeting rooms, and conference spaces. Coworking areas are also available, in addition to non-branded office spaces.

West of Euston Station is Regent's Place, a large mixed-use development from British Land. Home to about 20,000 workers and residents, this modern office development has restaurants and cafés, shower facilities and locker rooms, dry cleaning facilities, bike storage, and other on-site amenities.

Euston Tower is part of the Regent's Place development and provides about one million square feet of office, retail and leisure space. The 34-storey building houses offices for banks and financial institutions, technology companies, and a variety of other exciting businesses. JP Morgan, Atos Origin, Santander and Elexon are just some of its tenants.

The Euston area is also home to Euston House, an art deco inspired building located next to Euston Station at 24 Eversholt Street. Offering a number of fully-furnished serviced office spaces, Euston House is an ideal work location for businesses looking to establish themselves in an inspiring and luxurious building that comes complete with state-of-the-art amenities.

Home to one of the busiest railway stations in the UK, the Euston Station transport interchange, as well as the nearby Euston Square station providing Underground services, the area is a fantastic office location for businesses looking for excellent access to mainline and underground lines with transport links to other Central London locations, as well as destinations across England, Scotland, and Wales. The Euston area is also conveniently close to Tottenham Court Road, Goodge Street station, Great Portland Street station, and Warren Street station and the major transport hub of King's Cross St Pancras International station, which provides additional services throughout the UK and continental Europe.

Why You Should Rent Office Space in Euston

Due to the convenient links to other cities in Europe, many businesses in the area of Euston station and Euston Square station work hand in hand with a number of major European institutions and organisations. Aside from its advantages as a major transport nexus, the Euston area is also a bustling entertainment and retail hub, featuring an eclectic mix of commercial outlets, as well as being host to many prestigious multi-generation-spanning institutions. Some of the organisations based in Euston include the Wellcome Trust, as well as the Wellcome Collection museum, the Royal College of General Practitioners, University College London, and University College London Hospital. Numerous hotels, restaurants, cafes, and shops, are also major employers in the area.

Located close to several London landmarks - including the British Library and University College London - Euston is part of the London Borough of Camden and can be found between the nearby areas of Fitzrovia and Regent's Park.

Providing connections to North Wales, the North West, Scotland, and the West Midlands, in addition to innumerable Central and Greater London areas, London Euston is one of the busiest railway stations in London. Built between 1962 and 1968, the existing structure was a replacement for an original station that opened in 1837. South of the station is Euston Square, a small public garden that was created in the early nineteenth century and now the site of an underground station of the same name.