Try our search service for free now - we promise to help you find the perfect coworking hub or serviced office space to rent in King's Cross, North London at a cost effective price. 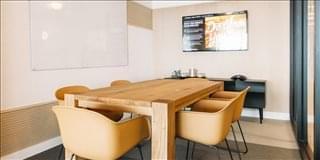 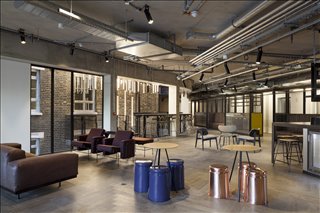 The Stanley Building provides premium serviced office accommodation and business services at the gateway of the King's Cross development. Seven Pancras Square has approximately 30,000 square feet of floor space over five floors. Designed by Studio Downie Architects, this modern building was developed specifically for providing serviced accommodation in a range of sizes and office options.

The Stanley Building has been... More info 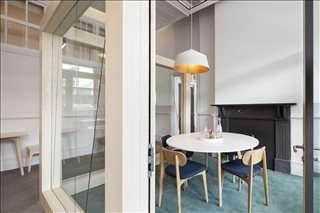 The East Side King's Cross business centre houses private office spaces for entrepreneurs and businesses as well as a shared workspaces with event space, kitchen and dining facilities on each floor, and other shared amenities. Offices come furnished or unfurnished, giving you the flexibility to make your new workspace your own.

With capacities ranging from four to 18 people, bright meeting rooms with high ceilings and... More info 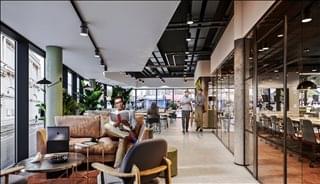 This newly-fitted out King's Cross location is a joy to behold. By choosing a calming neutral palette of earthy tones with pops of colour and adding plants and greenery to bring the outside in, these private offices create a warm, inviting environment that provides people with relaxing and restorative space. With sizes available of all sizes, this centre is perfect for businesses big or small. Clients will benefit from large windows and... More info 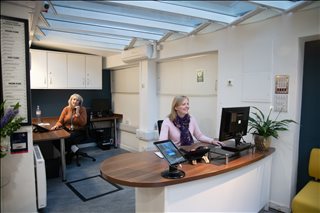 This mixed use centre on King's Cross Road, King's Cross WC1 has been completely refurbished to offer a bright and airy environment, providing both conventional and serviced offices. 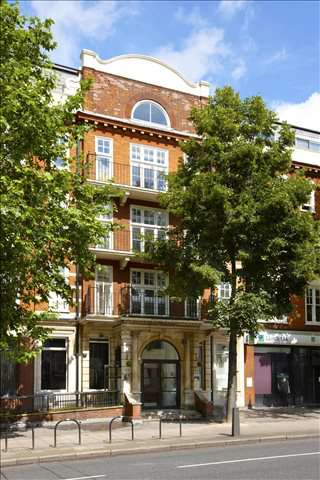 Fully refurbished with over 22,000 sq ft to occupy, this centre is situated only a couple of minutes walk from London King's Cross station and the new Eurostar London Terminal making it an ideal location for any business, big or small. Most suites are air-conditioned and disabled access is available to all areas and conference rooms, making meeting your customers from the north of England and mainland Europe convenient and easy. This... More info 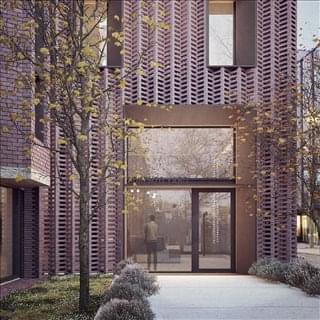 This excellent listing offers outstanding office accommodation, located in the heart of Central London. The self contained office building has shared office space spread across five floors, each floor has space for up to 160 workstations and a wealth of fantastic amenities on offer. Tenants can benefit from; private phone booths, spacious and vibrant break out areas, an on-site cafe and a fitness centre. The office building also has... More info 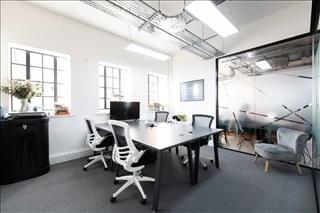 Newly modernised co-working hub offering a range of desks, and offices in a fantastic location. The co-working hub is located right at Kings Cross and St Pancras Stations. The office space has large windows, allowing an abundance of natural light into the working area. This fresh new office space has many great facilities, there is fibre internet/WiFi, bike storage, lockers and tea and coffee supplies. This is a must-see location is very... More info 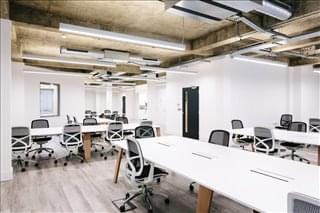 The workspace has recently been refurbished to provide a 13,263 sq ft total floor area over lower ground, ground and four upper floors. This comprises 11,389 sq ft of Grade A office and ancillary accommodation in addition to a prominent 1,874 sq ft ground floor retail unit. The offices benefit from excellent natural light and have been completed to a contemporary Category A+ condition, including data cabling to risers and pre-installed... More info 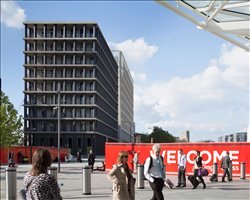 One Pancras Square at Pancras Square, King's Cross N1C has approximately 55,120 sq ft of high standard business accommodation over eight floors including shared space, managed offices and serviced office space. Retail spaces are found at street level, including cafes to grab your morning coffee or meet with clients in a relaxed environment. Completed in 2013, the building is accessible from Pancras Square or King's Boulevard and boasts a... More info 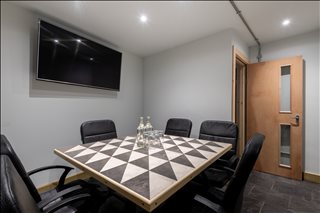 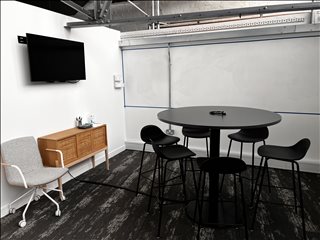 Looking for an office space that is both stylish and spacious? Then look no further than this fabulous business centre! The premises are self-contained and boast a generous floor-to-ceiling height with an impressive pitched roof, making this the perfect place to conduct business in comfort. The exposed air conditioning and fresh air system not only provides necessary heating and cooling capabilities but is also an aesthetically pleasing... More info 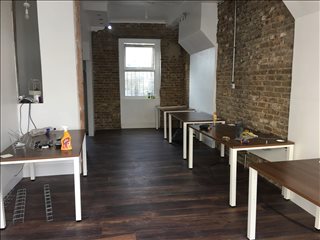 This stunning office space is split over two floors and provides 721 square ft of spacious, newly refurbished office space to rent. Providing you and your team with lots of room to turn into a space that your business can call home. The ground floor features a large open space suitable for 5-7 spacious desks. The basement comprises 3 rooms, kitchen and access to a small courtyard area. This space boasts a stunning interior design and... More info 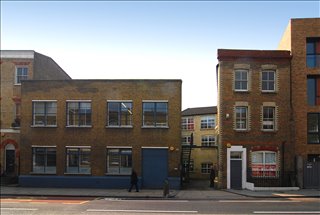 A house in the country 300 years ago, and then a brewery in the eighteenth-century, this centre is a two- and three-storey building with ground and first floor currently occupied by two respected architects' practices. The original timber roof trusses and internal timber structure are exposed, and space is open-plan. Working areas are separated by 3/4 height screens which can be removed to provide flexible space for one to five or more... More info 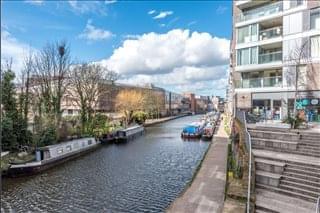 Modern, newly built building just off the canal. Extremely high spec, and modern high-tech workspace. Ultra-high-speed fibre broadband (1 GB) and Wi-Fi at no extra cost. Also installed is a VOIP telephone system with direct dial numbers to each desk, incorporating call forwarding, remote access, voice mail to email and a full suite of other VOIP options. Ground and mezzanine of the office are fully independent of each other and can be... More info 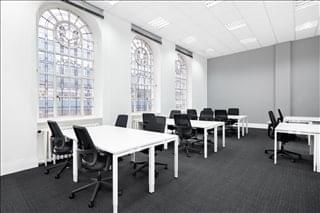 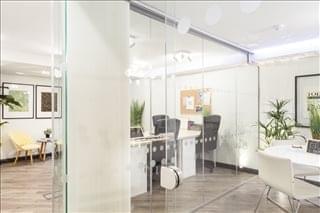 Striking contemporary workspaces on the ground floor and basement are available with a flexible licence agreement, giving you greater freedom to adjust your space as your business needs change. The... More info 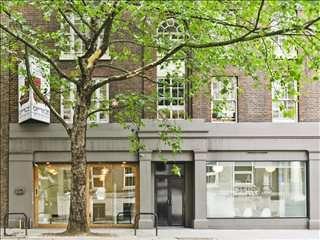 This commercial building at 175-185 Grays Inn Road, London, WC1X was built in the 1950s and has since undergone a full refurbishment to create a wide range of bright, comfortable, spacious offices. All of the office suites are tastefully decorated and furnished. One of the best features is the unique organic green roof, one of only a few in the WC1 area. More info 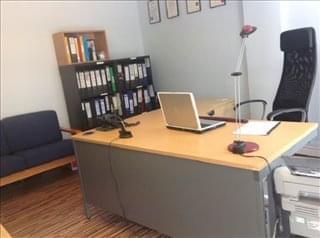 This building is situated between a row of shops and offices on Crowndale Road. It is a fresh and contemporary design workspace conveniently located with easy access to transport links. There are four fully-furnished private offices of 707 sq ft currently available. They would accommodate 2 to 5 people. There is also an array of co-working desk space available for Â£300 per month. This all-inclusive cost includes bright desk space,... More info 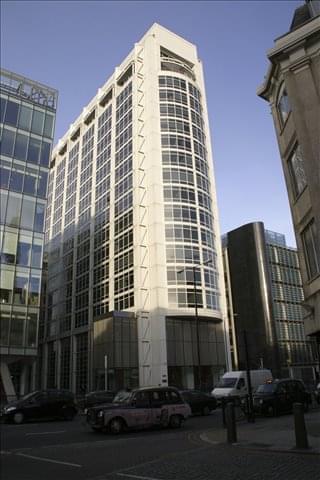 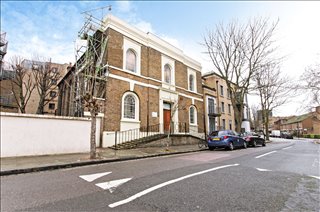 This unique centre operates from an old Baptist Church in King's Cross. The open-plan industrial style office is dominated by an up-cycled hot desk which in turn is flanked by a total of eight fixed desk positions and culminated into a raised chill-out area. The space is complete with plush artificial grass, beanbags, a TV screen and games consoles for relaxing breaks. Membership here allows access to other centres under this provider.... More info

Coworking from £300 per person per monthVirtual from £30
32 Cubitt Street, Central London - WC1X 0LR

Why You Should Rent King's Cross Office Space

During the Victorian period, King's Cross was an important industrial hub. By the end of the twentieth century, it became dominated by railway lands, unused buildings and warehouses. The arrival of the Eurostar rail service in mainland Europe, starting in the 1990s, as well as the redevelopment of St Pancras International in 2007 helped to transform King's Cross into the globally known location that it is today. This area is also home to King's Cross station, a major terminus for rail services connecting the vast majority of the United Kingdom.

A major regeneration effort in the area is King's Cross Central, a mixed-use development on a 67-acre site north of King's Cross and St Pancras. This development involve the transformation of former railway lands into residential, commercial and leisure spaces using a combination of new and restored buildings.

New parks, squares and streets are also being laid out. The Central Saint Martins campus of the University of the Arts London is one of the new quarter's first occupants in 2011. New restaurants and shops have also opened and the Great Northern Hotel was refurbished.

King's Cross has experienced regeneration and significant growth in terms of available business space in the area. In total, 3.4 million square feet in 19 new and refurbished buildings will provide new workspaces for businesses in various sectors.

London Office Space has office listings for a wide range of serviced offices, flexible desk space and shared workspaces, and private office spaces in King's Cross and throughout North London. The featured listings above represent a small selection of the serviced offices and flexible spaces currently available. If you can't see the space you're looking for, please let us know what you're after, and we will find it for you.

The area now known as King's Cross was once farmland until it was developed following the construction of New Road in 1765, which was renamed Euston Road. The construction of the Regents Canal in 1820 industrialised the area. Centred on a bustling train station of the same name, King's Cross hosts an array of theatres and restaurants that are increasingly attracting crowds to the area.

Completed in 1852, King's Cross Station provides high-speed transport links to the North East, Scotland and Yorkshire, all of which arrive and depart from the grand terminus. In popular culture, King's Cross is commonly known as the station in which Harry Potter and his fellow students board the train bound for Hogwarts from Platform 9 3/4.

Browse the listings above for King's Cross serviced offices and shared spaces to rent with inclusive pricing, covering rent, business rates and facilities. In addition to the currently available office rentals listed, from time to time we are also able to offer offices to rent in other prime office locations in King's Cross, North London. Fill in the Quick Quotes form or call us at 020 3965 9617 to speak to an expert.