We have flexible office space available near Leicester Square in London's West End. The serviced offices and workspaces are fully furnished with all inclusive pricing and no set up costs. Just move in and get to work. 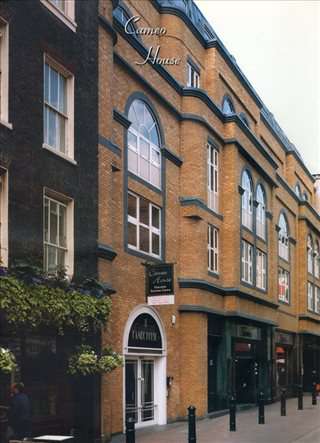 This serviced office centre at 11 Bear Street, London WC2H is a stone's throw from the world famous Odeon Cinema in Leicester Square. A short stroll will take you to tube and mainline rail links including Leicester Square, Covent Garden and Piccadilly Circus tube stations as well as Charing Cross train station.

The flexible workspace is available on short term contracts and the all inclusive pricing means that air conditioning,... More info

Leicester Square is perhaps most recognised as the site of many important cinemas, which often host national and international film premieres. Venues include the Odeon Leicester Square and the Empire Leicester Square, while the Prince Charles Cinema, Odeon Panton Street and Vue Cinemas are located just off the square. Many of the area's cinemas were former nineteenth century theatres that were converted to showcase films. The Hippodrome Casino and the headquarters for Global Radio are also found on the square.

Retail, entertainment and tourism are top industries in and around Leicester Square. The pedestrianised square is a popular tourist draw and sees several events throughout the year, including Chinese New Year festivities and the London Film Festival. Hotels located on or near the square include the W London Leicester Square, the Premier Inn London Leicester Square and the Radisson Blu Edwardian Hampshire. There are numerous restaurants, bars and nightclubs throughout the area that help drive the area's evening economy. Leicester Square is also just north of Trafalgar Square, which is home to top tourist attractions including the National Gallery and National Portrait Gallery.

Businesses based around Leicester Square find themselves at the crossroads of many of central London's most important industries. It provides a great location for businesses working with government departments and decision makers to the south in Westminster. The area is also ideally situated for businesses working with the West End's creative industries including fashion, media and television/film production sectors in Covent Garden and Soho.

LSQ London, a new landmark building at 48 Leicester Square, occupies much of the square's western side. Completed in 2016, the new office building has 95,000 square feet of office accommodation that has been designed specifically for corporate headquarters. It also features 17,000 square feet in retail space.

Leicester Square is bound by Lisle Street, Charing Cross Road, Orange Street and Whitcomb Street. Situated within the City of Westminster, the square is centred around some of London's most popular sites including Trafalgar Square to the south, Covent Garden to the east and Piccadilly Circus to the west. Leicester Square also sits in London's famous West End and is surrounded by several cinemas, including the Odeon Leicester Square and Empire Leicester Square. Odeon West End was also located at Leicester Square before closing. These cinemas are often used for national and international film premieres.

The square is also a popular tourist attraction and hosts several events throughout the year, including annual Chinese New Year celebrations and the London Film Festival. Created in 1670, the square was named after Leicester House. A park has been at the centre of the pedestrianised square and was originally known as Lammas land. It was refurbished in the nineteenth century, when four statues and a fountain of William Shakespeare were added. The square was upgraded again in preparation for the 2012 Olympic Games.