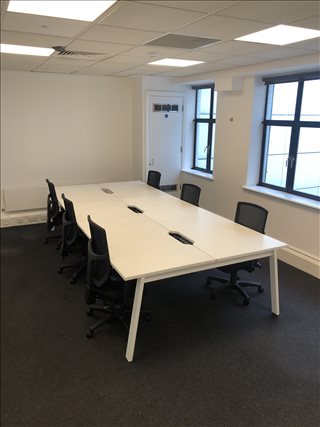 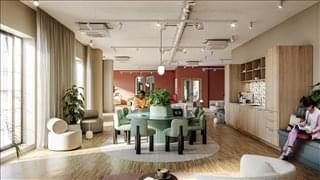 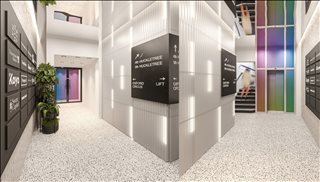 In the heart of central London. Across two light-filled floors and 22,000sqft, teams can work from the parlour, run product demos from the immersive meta-lounge, ideate on our sunshine-drenched terrace oasis or dream-it-out in our calm kaleidoscopic atrium. The building is a two-minute walk from Oxford Circus underground and a six-minute walk from Tottenham Court Road. Can't spot us? Look for the coloured glass and don't forget to look up. ... More info

This impressive Soho coworking hub, situated at 6 Ramillies Street, has been refurbished to a remarkable standard and provides high specification, design led shared workspace and office suites perfect for freelancers and small companies in creative fields, offering unbranded space which allows maximum versatility on how your business presents itself to customers. This business centre offers shared collaborative workspace, providing an... More info

Boutique office suites to rent on flexible terms in this beautiful period building at 5 Margaret St, Fitzrovia W1W. The fully furnished private office suites are offered on an all inclusive basis that covers rent, business rates, cleaning, maintenance, and IT support. Also included are fast internet access and WiFi, a meeting room, 24 hour secure access to the property and a kitchenette.

Nestled in a quiet corner, with fashion... More info

This high end building is a wonderful example of modern architecture, housing a collection of private office suites come furnished to a very high standard with everything you would expect in a modern workplace, while shared coworking space, which appeals to many of today's freelancers and startup companies, provides a vibrant, collaborative work area with shared infrastructure, and the added benefit of lower overheads.... More info 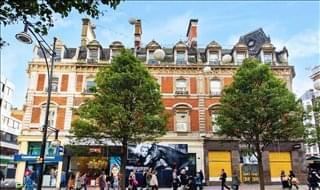 This stunning building is located in the heart of Mayfair, where a combination of the recently refurbished interior alongside beautiful design has created an environment that is both inspiring and impressive, whilst still remaining fully professional. The offices are available on flexible terms and can come furnished or unfurnished depending on your needs, ideal for businesses seeking chic, unique office space in a prime central London... More info

Oxford Circus joins Oxford Street and Regent Street, two of the West End's most important shopping streets. Like the surrounding area, retail is the driving sector at this busy intersection. Flagship and major shops at Oxford Circus include Nike Town, H&M, Topshop and Topman, Miss Selfridge, Schuh, and United Colors of Benetton.

Other businesses in the area include business management consultants, property management companies, software companies, investment brokers, production studios, and a range of other companies. Oxford Circus's location close to media and creative industries in Soho as well as fashion companies and retailers make it an attractive base for a variety of businesses.

At the south-east corner of Oxford Circus is Spirella House. The Grade II listed office building at 266-270 Regent Street was originally called Paris House. It was designed as part of the original Oxford Circus development from 1913 to 1928. Adjacent to the period building is 25 Argyll Street, formerly Regent Arcade House. Serviced office options in the area include the Oxford Circus Business Centre at 4 Cavendish Square. The elegant townhouse has been transformed into a modern office space close to Oxford Circus tube station. It includes meeting rooms, break out areas, and showers.

Each year, both streets are illuminated with some of London's most admired Christmas lights. It is little wonder that Oxford Circus sees the highest numbers of pedestrians in London, with tens of thousands of people walking through the junction each hour at its busiest times. It was laid out at the start of the nineteenth century and was designed by architect John Nash, who also planned out Regent Street and Regent's Park.

Oxford Circus is served by a London Underground station of the same name. The station is on the Bakerloo, Central and Victoria lines and is the UK's busiest station. In addition, Bond Street, Piccadilly Circus and Marble Arch tube stations are a few minutes walk away. Multiple bus routes intersect the area.