Our Central London office search service is completely free to use, and our advisors are on hand to go that extra mile in finding the perfect business address at cost effective rates. We offer a comprehensive range of workspace options in Oxford Street, from serviced business centres, creative workspaces, shared office space and desk rentals to short term rentals, industrial and warehousing, virtual offices and conventional commercial property leasing. 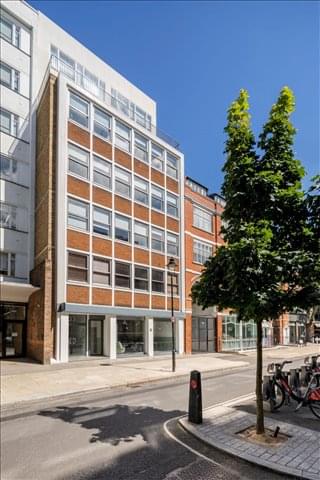 Fully fitted lower ground office in Bloomsbury with a private courtyard. 3,142 sq ft fully fitted and fully managed office space available at ground and 1st floor. This isn't co-working, the best bits of a serviced office, with added benefits. The workspaces are fully fitted with own meeting rooms, kitchen and breakout area. Client will have private floor has own front door and plenty of space to brand way. With simple, flexible agreements,... More info 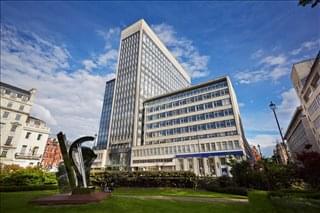 This centre is a great space that has been designed to meet the demands of any modern business. This state of an art centre provides an excellent platform for any business to flourish with its cost-effective workplace solutions. It offers serviced office solutions. The office spaces have large panoramic windows creating an airy, light-filled environment. Additionally, The building provides a rare opportunity to occupy prime office... More info

A recently refurbished office space with a sleek, stylish interior design that boasts a great view of Oxford Street. This space is filled with natural light and trendy furniture. A perfect space for a start-up or a small company of six people. Members have access to useful and meaningful amenities including a fully equipped kitchen with free-flowing tea and coffee. Business essentials such as high-speed internet, business-class printers,... More info

This building achieves something unique: beautiful space at an iconic address for a genuinely affordable price! The workspace offers the highest levels of cost-efficiency whilst providing a premium and all-inclusive service - this space is no exception. The building features only four offices in total, each on its own floor and with private facilities that include a meeting room, kitchen and WC. There's also access to a furnished communal... More info

This bustling office building offers a vibrant work environment in a fully managed centre. The property's business centre promotes a pleasant and relaxed atmosphere for entrepreneurs and workers with comfortable breakout areas and other convenient amenities.

You are at the doorstep of one of the world's premier retail destinations with high street shops alongside internationally-renowned fashion houses, including along nearby... More info

This exciting London coworking space makes it possible for freelancers, small project teams and startups to share workplace infrastructure, facilities and services, along with fostering a convivial and energetic environment - conditions that encourage collaboration, project and team work.

The stylishly decorated workspace at Holden House, 57 Rathbone Place, London W1T is offered fully fitted out and furnished to a particularly... More info

An estimated half a million people visit Oxford Street each day. The major road between the City and the West End is home to some 300 shops, making it one of London's top retail destinations and one of the world's busiest shopping streets. Retail has been at the heart of Oxford Street's economy since the end of the nineteenth century, as furniture stores as well as drapers and cobblers began to set up shop. Department stores soon followed, including John Lewis in 1864 and Selfridges in 1909. House of Fraser as began as D H Evans in 1879 on Oxford Street, as did Debenhams, which opened as Marshall & Snelgrove in 1870. A number of British retailers operate flagship stores on Oxford Street, including House of Fraser and Selfridges.

Although retail remains the main economic activity along Oxford Street, businesses in other sectors are active in the area. These include businesses in Soho's media, creative and publishing sectors. There are several office options on and close to Oxford Street. Serviced offices are available at 77 Oxford Street, which includes secretarial support and meeting rooms. At Mappin House on 4 Winsley Street the offices provide space for creative businesses in an exclusive location. Built in 1906, the stunning Edwardian period exterior is contrasted with a contemporary interior. The location boasts more than 24,000 square feet of office space as well as five meeting rooms. Numerous offices are also found at Hanover Square, just south of Oxford Circus. Options include 17 Hanover Square, a serviced business centre with administrative support services and shared meeting rooms. Businesses at Hanover Square can leverage an upmarket address close to Mayfair.

Just north of Oxford Street and close to Oxford Circus is Cavendish Square, another popular office destination in the Oxford Street area. Serviced offices are available at 4 Cavendish Square, a Grade 2 listed townhouse with modern offices and amenities. Inside the elegant building are meeting rooms and communal areas for shared use of tenants based at the location. The modern 21-storey office building at 33 Cavendish Square also provides flexible workspaces for businesses in various sectors. Business amenities include a staffed reception area, on-site restaurant, conference rooms, phone answering services, and more.

Oxford Circus station is on the Bakerloo, Central and Victoria lines and is the UK's busiest station. In addition, Bond Street, Piccadilly Circus and Marble Arch tube stations are a few minutes walk away. Multiple bus routes connect the area with the rest of London.

Oxford Street is among the world's most visited shopping destinations. Located in London's West End, it is the third-busiest shopping street in Europe and attracts about a half a million visitors each day. Since the 1930s, the street has been almost entirely retail. Known by its current name since the eighteenth century, Oxford Street is lined with some 300 shops, including some of Britain's first department stores. Selfridges has had its flagship stores on Oxford Street since 1909, while John Lewis started as a small shop at Number 132 in 1864. The London flagship store for the House of Fraser opened as D H Evans in 1879 and has been at its current location since 1935. HMV also opened its doors from its original location at Number 363 in 1921.

Although nearby Bond Street retains a more upmarket feel, Oxford Street boasts a mix of high street and luxury retail outlets. One of Oxford Street's annual highlights has been the switching on of the Christmas lights by a celebrity guest. Past celebrities invited to turn on the decorative lights that line the street since 1959 have included Richard Branson, Bob Geldof, Kylie Minogue, Jim Carrey, Robbie Williams, Ronan Keating, the Spice Girls, and the cast of Coronation Street.