We have a substantial portfolio of Park Lane office space for rent, and experts dedicated to finding you the ideal business location in West Central London. Whether it be serviced offices, flexible rentals, short term space, hot desking, freelance friendly shared workspaces, commercial units or virtual office solutions - we can help you find the ideal spot to set up shop and get busy working right away. 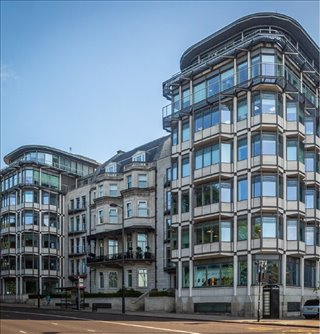 The available office accommodation comprises of the entire 3rd floor and is arranged in a partially open plan format with 3 meeting rooms and 6 private offices, manned reception, 24 hour access, WC's on each floor, 12 person board room, 2 kitchenettes, 3 meeting rooms, 24 desks, dedicated reception ,cat 6 cabling. This is a flexible plug and play set up with excellent views of Hyde Park. Commuting to and from the office is extremely... More info

Once a fashionable place to live, Park Lane hosts several historic hotels including the London Marriott Park Lane Hotel and the London Hilton on Park Lane. Other luxury properties include The Dorchester on Park Lane, InterContinental London Park Lane, Sheraton Grand London, and Grosvenor House. The street is also home to several luxury sport car garages, such as the Stratstone of Mayfair's flagship Aston Martin dealership. BMI and MINI also have outlets along Park Lane. Mamasino at 102 Park Lane and Wolfgang Puck's restaurant at 45 Park Lane are two of the street's top restaurants.

Several businesses in the area support Park Lane's hospitality sector, including car rental agencies, leisure facilities and restaurants. Many of these outlets are based within Park Lane's many luxury hotels.

Like much of Mayfair, former homes to the east of Park Lane and along the street have been converted into offices. These offices are home to businesses in various sectors, including investment, finance, real estate and recruitment firms. In addition to corporate headquarters, the area also has several embassies including diplomatic missions for Egypt and Saudi Arabia.

Just to the east of Park Lane is Two Park Street, a refurbished office building with nearly 43,700 square feet of Grade A office accommodation. The site includes a contemporary reception area and secure car parking. Nearby office developments also include Berkeley Square House. Serviced and day offices are available in a modern space close to the West End, making it a popular choice for corporate suppliers. The facility includes meeting rooms, a business lounge, and 24-hour access.

Offering a leafy and elegant streetscape, Park Lane runs along the eastern edge of Hyde Park in the City of Westminster. The major street serves as a border between the park and Mayfair to the east, an exclusive area of London's West End that is the home of corporate headquarters, embassies and other businesses. Mayfair also boasts swanky restaurants and shops as well as a number of luxury hotels.

At the south end of Park Lane is Hyde Park Corner and to the north is Marble Arch, a nineteenth century triumphal arch that was once stood outside Buckingham Palace. Park Lane was a favourite address for some of London's most affluent residents. Historic properties include Grosvenor House, Somerset House, Dorchester House, Brook House and Dudley House. Park Lane is also the location for many five-star hotels including the Sheraton Grand London Park Lane and the London Hilton on Park Lane. Opened in 1931, The Dorchester is one of the world's most prestigious hotels and has been a firm favourite for the world's rich and famous.