Take a look at our Pimlico office space, available to rent on flexible terms, including executive suites and furnished offices benefiting from a full service package. We also have coworking and shared workspace, conventional commercial property, desk rental, warehouse space, short term office space available with easy in/easy out options, and virtual office opportunities. Our easy to use, Central London office space search service is focused on finding you the ideal business accommodation at competitive rates. 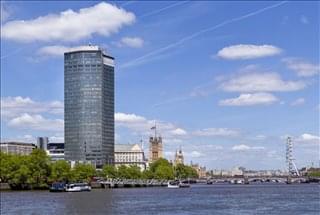 The centre offers a beautifully designed and high-quality workspace at a cost-effective price point. Featuring spectacular views from one of London's most iconic towers, the spaces have a real Wow Factor as well as convenient transport links for commuter trains and tube networks in the capital. Each self-contained office unit is newly fitted out and features its own private facilities such as a kitchen, meeting rooms and breakout space.... More info

Known for garden squares and Regency architecture, Pimlico is well situated close to Victoria station. The largely leafy residential area has had an important role in Britain's political life thanks to its close proximity to Westminster Palace and the Houses of Parliament. Pimlico is also the base for the National Audit Office, which is housed in the old Imperial Airways Empire Terminal on Buckingham Palace Road.

The Art Moderne building was designed in 1938 and was used by passengers as well as mail and freight travelling by rail to the company's flying boats stationed in Southampton. The headquarters of the Catholic Bishops' Conference of England and Wales is also located in Pimlico at Eccleston Square. With the Chelsea College of Art and Design at the old Royal Army Medical College and the Tate Britain a short walk away, the area also has a rich cultural and fine art scene.

Most of Pimlico's businesses are based close to Victoria station. Businesses include restaurants, cafés, hotels and shops that support travellers using the rail station as well as workers in nearby Victoria Street, which is home to the Metropolitan Police's headquarters at New Scotland Yard, the Department of Business, Innovation and Skills, and other offices. Office spaces are also found along Vauxhall Bridge Road, Wilton Road, Buckingham Palace Road, and other roads within the northern tip of Pimlico.

Pimlico is a largely residential district in Central London. The quiet neighbourhood's elegant streetscape is known for its grand terraced houses, brick townhouses and white stucco facades. Many of the buildings found in the area are fine examples of the Regency architectural style. Mixed in with Pimlico's residential areas are churches, garden squares, galleries and cafés that are often overlooked in favour of other parts of Central London. Pimlico sits within the City of Westminster.

The small, well-planned area was laid out by Thomas Cubitt in 1825 as demand for land for development grew following the Great Plague and Great Fire. At the time, land in the area was largely marsh that was being reclaimed with soil from the construction of the St. Katharine Docks. Over the years, Pimlico was the home of former Prime Minister Winston Churchill, former French President Charles De Gaulle, actors Laurence Olivier and Rhys Ifans, authors Aubrey Beardsley and Bram Stoker, designer Laura Ashley, and other notable individuals. Attractions include Dolphin Square and Churchill Gardens, as well as several churches including St. Gabriel's, St. Saviour, St. Peter's Eaton Square and St. James the Less. Although the Tate Britain is sometimes considered part of Pimlico, it is actually in Millbank.