Our experts are on hand to help you find the perfect Bond Street office space to rent at cost effective prices. We have an extensive commercial property portfolio in the West End of London, offering private serviced office suites, shared and coworking space, hot desking opportunities, virtual office services, and short term rental on flexible terms. 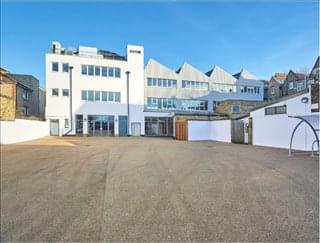 This flexible workspace offers 17,000 sqft of offices, meeting rooms, event space and co working desks over 3 floors. The building also features a lovely courtyard space out the front of the building which adds even more of a charm to this chic building. Podium provides a fully furnished with modern furniture building with a number of many excellent amenities such as an on-site cleaner, WiFi, friendly reception services, meeting rooms,... More info 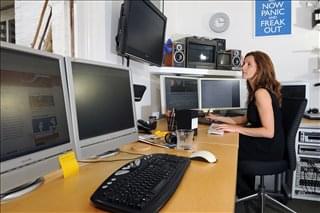 The workspace offers an excellent and modern working office space with all the required instruments for seamless working, such as a telephone answering service, a reception desk manned during office hours, 24-hour access to the building, fast internet access, an on-site management team always available to help with any queries or issues members may have, and a fully airconditioned workspace with central heating. The workspace also has a... More info 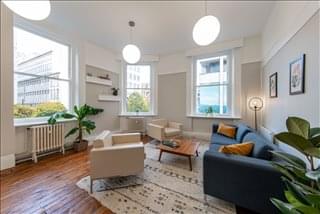 A traditional design with a contemporary twist, the private offices in Mayfair embrace the building's original high ceilings, wooden floors and are awash with natural light. The space is newly refurbished office spaces boast three kitchens, access to three communal meeting rooms, a manned reception, and a large break out area. It is fully furnished with extremely high-quality fixtures and fittings and is available on an all-inclusive... More info 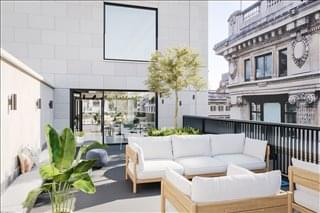 This building is a wonderland for all things digital â€“ providing an ever-expanding hub of creatives with never-ending networking opportunities. This business centre in London is the leading flexible workspace provider with multiple office solutions for every business. This business centre provides fully furnished offices with high-speed internet, parking space, meeting space, professional-grade daily cleaning, IT support and telecom... More info 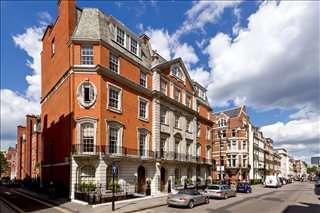 This outstanding period building in Brook Street dates back to 1897 and has been thoughtfully restored to offer 56 fully furnished and fitted office spaces for rent complete with Polycom VVX 410 telephone system and internet/wifi... More info 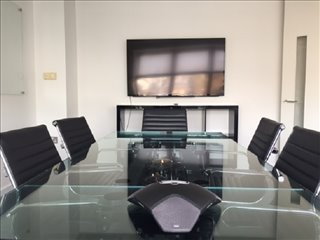 As one of the West End's busiest shopping destinations, Bond Street's main economic driver is retail, which has been an important force in the area since the eighteenth century. Bond Street, London remains home to many shops that often cater to upmarket shoppers. The Royal Arcade, Tiffany's, department store Fenwick, and many haute couture stores are found on Bond Street, London.

Auction houses Sotheby's and Bonhams are also based in the area. A number of art dealers and antique shops are clustered around Bond Street, particularly close to Sotheby's.

Bond Street sits between two of the West End's most sough-after districts, each of which has distinct economic bases. While financial and property management dominate in the affluent Mayfair district, Soho is known for its media and creative businesses as well as its film and television production industry. The proximity to Oxford Street and Regent Streets also makes the Bond Street area a popular choice with businesses working with retailers and fashion houses.

Like the other exclusive areas in the heart of Mayfair, many office buildings on or close to Bond Street have period appeal. For the most part, they are converted residential properties.

One of the most expensive pieces of real estate in Europe, the street is divided into Old Bond Street in the south and New Bond Street in the north. Bond Street links Piccadilly and Oxford Street in the West End, City of London. The narrow street is a popular shopping destination, having been the home of respected and luxurious fashion outlets since the eighteenth century. It is one of Europe's most exclusive shopping streets, rivalling the Champs-Élysèses in Paris.

The street originally crossed open fields close to Clarendon House. It was named after Sir Thomas Bond, who purchased and subsequently demolished the nearby mansion in 1686 in order to develop the area. The area around Bond Street began to evolve into what it is today during the early part of the eighteenth century. By the end of the century, the street became a popular location for Mayfair's elite to mingle. Its social scene declined during the nineteenth century and became increasingly known for its luxury shopping. Central London's Bond Street is home to auction houses Bonhams and Sotheby's as well as Fenwick and Tiffany's shops, and the Royal Arcade connects Old Bond Street and Albermarle Street.