We can help you find office space in Borough that is available now, at budget friendly rates. View our South London serviced offices in business centres, shared workspace, dedicated and hot desk space in coworking hubs, industrial and warehouse units, conventional office leasing and virtual offices. Our professional consultants are on hand to find your business the perfect Central London address at a price you can afford. 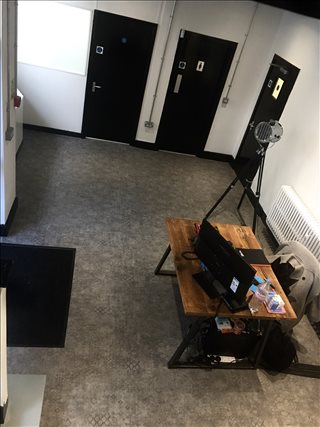 This professional office space is located near London Bridge, SE1, and offers fully serviced office space and coworking, on flexible terms. Here you will find all-inclusive pricing, so you can move in with peace of mind that there will be no unexpected costs each month, and all offices at this property are fully furnished. Located in a refurbished print works with communal break out areas reminiscent of a New York coffee house, this... More info 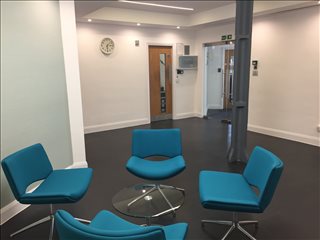 The excellent work centre provides ideal serviced office space to let in Southwark, South East London. Serviced offices are available to let at this business centre on flexible lease terms. The available offices range in size from 129 sq ft to 432 sq ft (12-40 sq/m), suitable for between 1 and 5 people. The office units can come furnished or unfurnished, whatever is necessary to suit the clients needs. The office suites have a wealth of... More info 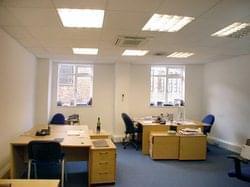 This business centre at 210 Borough High Street, Borough SE1 provides customisable corporate office spaces, with a focus on room and venue hire. Multipurpose rooms for workshops, courses, conferences, seminars and other events accommodate between two and 50 delegates. Air conditioned rooms may be configured in virtually any layout thanks to a mix of interview rooms, boardrooms, training rooms and conference rooms with presentation, visual... More info 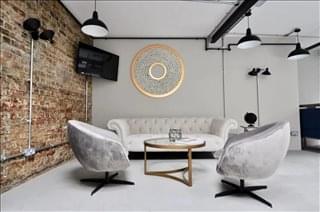 Situated in a historic and well-connected location, perfectly adjacent to Borough Station. The original old Victorian printworks is now transformed into a purpose-built workspace for members. The total size of the space is 2750 Sqft, and it is based over 2 floors. The number of total desks is estimated at around 55 for the whole office. Facilities onsite include the kitchen, showers, lockers. There are dedicated power and WiFi and business... More info 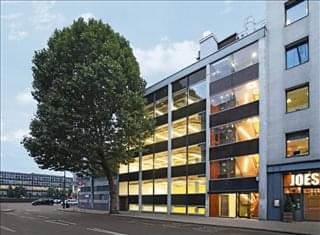 A fantastic office space in a central location that provides flexible solutions for teams of all sizes. This location offers 5 private floors of customisable workspace, perfect for companies looking to take their business to the next level. The interior of the building is as impressive as the exterior. Large windows allow this space to be filled with an abundance of natural lighting that creates a comfortable working environment for you and... More info 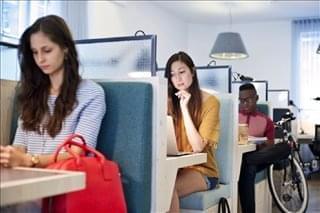 Inside, there is a mix of meeting rooms and event spaces as well as individual office suites and coworking spaces. Offices accommodate between two and 75 people. With sustainability in mind, the building incorporates several environmentally-friendly... More info 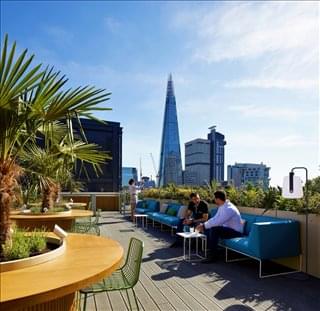 Ultra-modern office space located directly opposite to Borough tube station. Flexible rental terms are available on this stylish space, and there are around 365 desks available for either individual self-contained offices or larger working requirements. The office is equipped with modern furnishings and a comfy lounge area along with meeting rooms and a reception area. Kitchen and beverage facilities are also available to use along with... More info 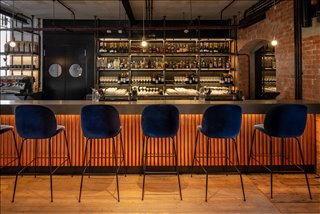 This listing offers outstanding office accommodation, situated in a prime area of Central London. The building is home to four floors of creative collaboration and the work space is situated above a members club. There is a mixture of private offices and co-working spaces available. The high quality office space has a wealth of fantastic amenities, this includes; private phone booths, luxury break-out spaces, business advice and support.... More info 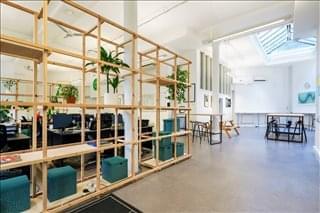 This Borough business centre offers a range of affordable offices for teams of four to 100. Each space is self-contained, bright, spacious, and available at a fantastic price. This location boasts a sleek and stylish interior design that will impress clients and colleagues alike. The space is filled with an abundance of natural light and has been designed with the wellness of its members in mind. Members are able to design their own work... More info 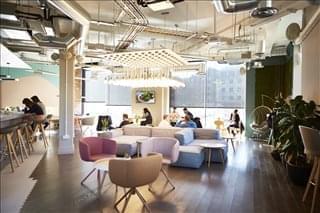 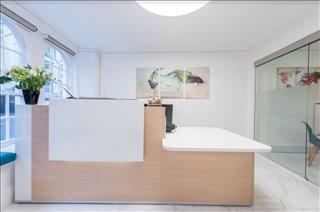 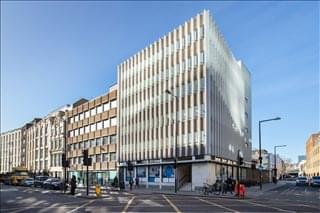 Located at 100 Borough High Street, Southwark SE1, Alpha House offers contemporary serviced offices near London Bridge and moments from other transport links. The furnished offices are arranged over six floors and benefit from access to spacious meeting rooms and a business lounge. Suites range from 100 square feet to 1,250 square feet, ideal for small- and medium-sized businesses looking for a prime location in SE1.

With its... More info

The centre has been a redevelopment of a landmark destination, ready for 150 new and growing businesses. A former Factory, the property has maintained many of its quirky historical features and is ideal for companies wanting an office/studio with a creative twist in a business-orientated location. The on-site management team are on hand to help with your needs and requirements and other amenities include the availability of meeting rooms,... More info 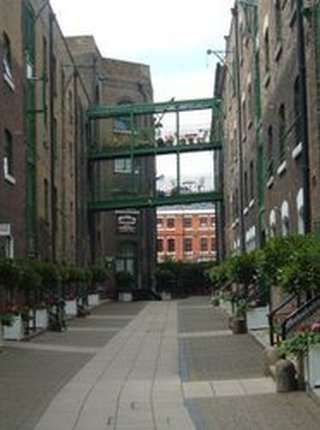 This office provides fantastic desk spaces in a gated mews of renovated Georgian warehouses off Borough High Street. The offices have been fully modernised and are on the top floor with double-height attic roof space, brightly lit with windows and skylights. Offering wood flooring and open brickwork, large desks and plenty of storage if required. Rent is inclusive of all costs, and 1 to 6 desks are available. More info 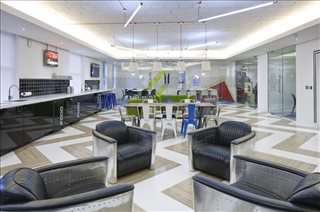 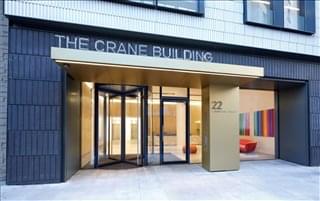 The Building is a seven-storey office building in Lavington Street, Southwark. Recently refurbished, its modern design includes a stunning roof terrace and courtyard that add something extra to members bog-standard office. With private kitchens, lounge space, high ceilings and a spacious atrium, it is a breath of fresh air that still retains a professional edge. The space is offering space on the 4th floor to be customised and fitted-out to... More info 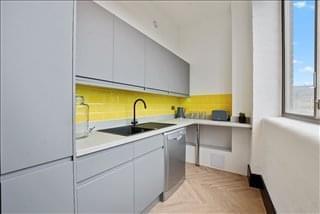 Set in the heart of Southwark, this once warehouse has been impressively transformed into a contemporary and stylish flexible workspace. The centre has a range of units available, with 15 person to 26 person suites on offer. Tenants will benefit from a simple, all inclusive rate as well as a robust menu of amenities. The space itself is bright with lots of natural light and open plan in design, facilitating a collaborative and productive... More info 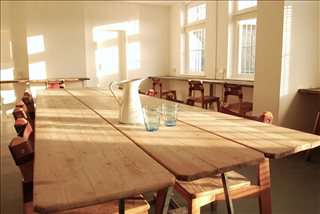 Attracting complementary and like-minded creative media based businesses and individuals to come together with a diverse range of expertise to cowork together under one roof. Including free use of super-fast fibre optic WiFi, communal meeting area and kitchen with free tea/coffee. Bookable meeting room, small outside terrace area and just across the road from Borough Market! More info 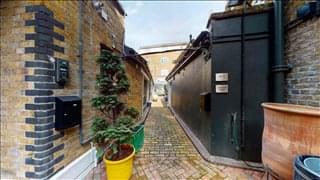 The workspace has a professional and spacious offices. The scheme consists of four adjoining buildings which have been converted from a Victorian stable mews. Set within a private gated courtyard, the four-self-contained offices are a mixture of single and two storey buildings. The premises comprise of a self-contained unit within a Victorian converted stable mews, comprising of three sections of predominantly open plan offices, a large... More info 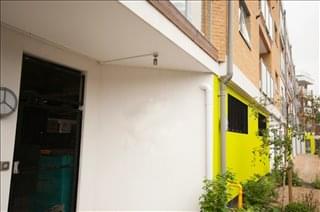 A modern look and feel throughout this coworking / shared office space creates a welcoming work environment to do business. Furnished and unbranded office spaces are serviced by the latest technology, including high-speed broadband and telephone systems.

Whether you are having issues with the office's Wi-Fi connection or you need cabling adjusted, in-house IT support will quickly resolve any technical problem or need.

Why You Should Rent Borough Office Space

'Borough' refers to the ancient Borough of Southwark along the south bank of the River Thames, which forms part of the larger London Borough of Southwark. The term contrasts the area with London City or 'The City', the capital's main financial centre, across the Thames.

Borough has seen significant regeneration efforts starting in the 1980s. Industrial buildings including warehouses and factories have been newly refurbished into new residential and commercial spaces. The diverse area is also home to Borough Market, a major wholesale and retail food market that has been operating for more than a thousand years.

A diversity of businesses operates in Borough, from law firms and marketing agencies to recruitment consultants and media organisations. London Bridge rail and tube stations are located next to Borough Market. They are at the centre of major redevelopment efforts, including some of the most recognisable building on the south bank of the Thames.

The Shard opened in 2012 and has quickly become an iconic building in the City of London's skyline. The 95-storey skyscraper is next to the smaller News Building. The 17-storey building is the headquarters for News UK and many of its publications.

Borough High Street is one of the area's main commercial thoroughfares. It provides a good base for companies working with major professional services companies based around London Bridge station as well as in the London More development next to City Hall and Tower Bridge. Ernst & Young, Gowlings, Gallup, PricewaterhouseCoopers (PwC) and Duff & Phelps are just a few of the major firms operating in the area.

Various offices are found along Borough High Street, including Alpha House at Number 100. The building has six floors of serviced offices to rent in Borough. On-site amenities include a roof terrace, bicycle racks, a car park, and meeting rooms.

London Office Space has listings for a wide range of serviced offices to rent, executive office suites coworking and desk space as well as private office space in Borough and throughout Central London. The featured listings above represent a small selection of the currently available office space to rent.

Much of this flexible office space for rent comes inclusive of fantastic amenities and features such as 24-hour access, meeting rooms, bike storage and more. If you can't see the ideal space to rent let us know what you're after and we'll find it for you.

Borough is situated in Zone 1 and is served by Borough, London Bridge and Southwark tube stations.The area is also extremely well connected to bus services throughout London.

A lively trading hub since at least the Roman period, the Borough area in Southwark remains centred around commerce. At its heart is Borough Market, a major food and produce destination that has helped make the Borough a favourite among London’s foodies.

Borough Market is one of London's oldest and largest retail and wholesale food markets. Although its days as a wholesale market have largely come to an end, the market and surrounding destinations make it one of London's go-to places to buy and experience food.

The present-day market on Southwark Street and Borough High Street replaced an earlier market that was based at London Bridge. The market was founded in 1014, although it may have operated earlier. The current buildings date from the 1850s and 1860s, although the market's Art Deco entrance was added in 1932.

More than a hundred stalls and stands sell food and produce from across the United Kingdom and Europe, including fresh meats, fish, vegetables, breads, cakes and much more. Some stalls also import items from other parts of the world.