Our free office space search service was designed to help you find the perfect business address in the Bank are of the City of London. Our London commercial property portfolio includes serviced offices in business centres, start up space, collaborative workspaces and hot desking in cowork hubs, virtual services, conventional office leasing and more. 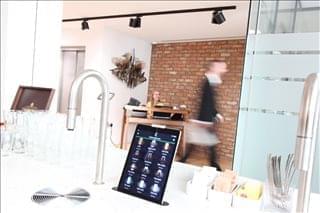 This attractive fully serviced business centre at 32 Threadneedle Street, London, EC2R 8AY provides the perfect opportunity for companies, offering all inclusive high level business support, admin and IT services. This classically styled building was built in 1910, and has been restored to now combine both bygone charm and elegance with state of the art technology. More info 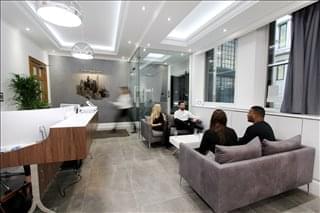 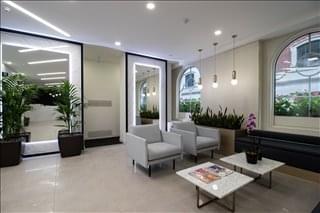 Birchin Court, 20 Birchin Lane is a wonderfully appealing period building that houses a collection of ultra stylish, contemporary serviced office suites, providing companies with an exceptional setting in which to conduct their business. Accommodation is offered completely outfitted, with furnished suites boasting modern decor, while at the same time the unbranded areas support increased versatility with regards to how you choose to... More info 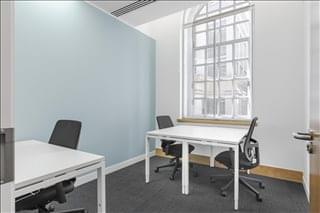 You can choose from private or shared offices and take advantage of the business lounge and meeting rooms that can seat up to 50 people. The quality office... More info 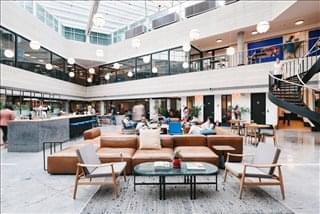 Modern, spacious and open plan office space, providing a flexible solution for your office accommodation needs. This work centre is located in the heart of Central London, with easy access to excellent public transport connections and amazing local amenities. Tenants can benefit from a wealth of facilities, including; 24 hour access, vibrant break out spaces, kitchen facilities and access to high quality meeting rooms. The work centre also... More info 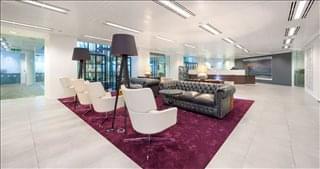 With approximately 319,736 square feet of floor space, 125 Old Broad Street is a landmark office building offering 26 floors of modern Grade A office accommodation. The property also has retail and restaurant space on the ground floor, creating a full-service business destination in the heart of the City. 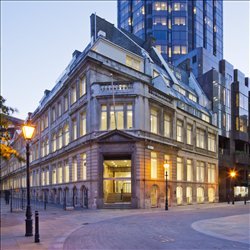 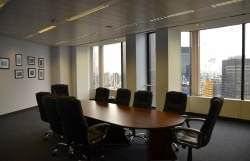 This desirable 17th floor City location has a number of office suites available on a flexible basis. Three fully furnished office suites are currently available. Two suites will accommodate three workstations, with a larger office suite with a capacity of six to ten workstations. These office suites are available together or separately. They are self-contained and fully inclusive of telephony, Internet and furniture. There is access to a... More info 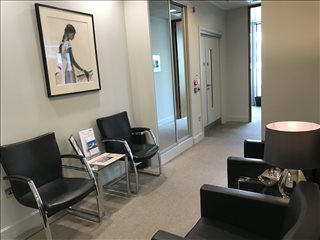 This space is a prominent office building in the heart of the City of London. Bank, Moorgate, Cannon Street and Liverpool Street stations are all a short walk away. The floor is divided into a combination of private offices and 3 meeting rooms. Space can be provided in varying combinations to suit an incoming occupier, with shared use of meeting facilities. There is a fantastic wrap around roof terrace available, with stunning views of... More info 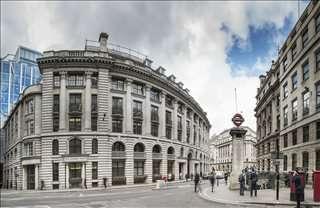 The commercial premises are well equipped to match European standards and features modern design details and furnishings, advanced quality telecoms and manned reception. Other facilities include meeting and board rooms, storage units and... More info 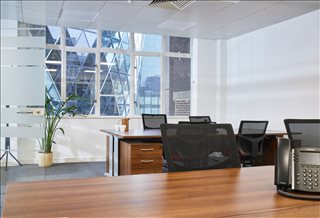 Newly refurbished period building with views of The Gherkin and Lloyd's building. There is office space immediately available from two to 120 desks in a variety of arrangements. The building facilities include 24-hour access, goods lift and male and female shower facilities, great if you are running or cycling to the office. Administrative support is available, as well as conference facilities, printing and copying facilities, access to a... More info 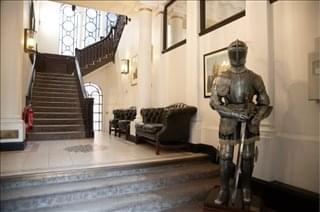 This remarkable Grade II Victorian building was once the home of Cazenove's, the Queen's stockbrokers. It has been transformed into high standard office accommodation with stunning facilities. Many original features have been beautifully preserved, including a grand central staircase, a decorative domed ceiling and spectacular chandeliers. 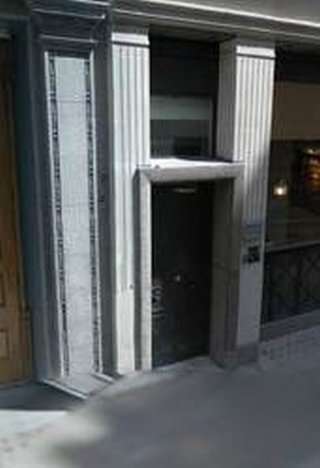 The fourth floor of this well located modern building comprises 323 sq ft. The office is refurbished and benefits from comfort cooling, perimeter trunking and excellent natural light. The floor is available on a flexible new lease from the freeholder and the quoting rent is Â£32.50 per sq ft per annum exclusive. The business rates payable are approximately Â£10 per sq ft and the service charge is approximately Â£8 per sq ft. EPC... More info 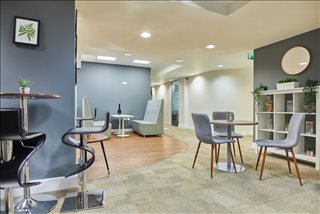 This business centre has undergone an extensive refurbishment to provide high quality serviced office space, and will shortly be equipped with a basement suite of showers, changing rooms and bike storage.Â The office accommodation has been fitted with full height doors and glazing, and each floor offers a fully stocked kitchen (including fresh fruit, cakes and real coffee!) and break out space. Tenants can benefit from 24-hour access,... More info 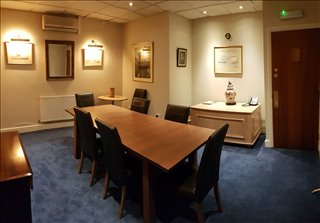 Offering fantastic deals, this boutique centre provides fully furnished and managed serviced offices, with the best technology for broadband and telephony. These air-conditioned suites are available by Licence for three months and more (average stay is about 20 months). The staff focus on providing a quality business environment at very good value for money. More info 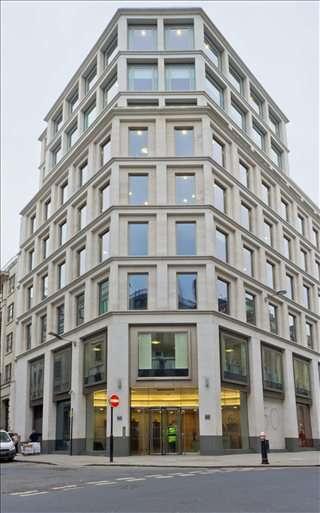 Fully serviced office space for rent is available at 60 Gresham St, Bank EC2V, on the corner of Gresham Street and Old Jewry. The modern shared and private offices come complete with high quality furnishings, lounge and meeting rooms, reception services, security staff, lifts and much more. The all inclusive pricing for these serviced offices covers business rates, utilities, broadband, furnishings and use of shared spaces such as the... More info

Why You Should Rent Office Space in Bank EC3

Bank sits at the heart of the City of London's financial district. The City remains a major business hub and the capital's primary financial and legal services centre. Hundreds of thousands of people commute into the City to work and conduct business each day. Some of the world's largest companies operate headquarters in the area, including Aviva, Lloyds Banking Group, Old Mutual, Prudential, Standard Chartered, and Unilever. The City is also a major centre for legal services with head offices for some of the world's largest law firms.

Bank provides an attractive location for doing business in London's financial and legal services sectors close to the Bank of England. The Royal Exchange is also located at the Bank junction, the meeting place for nine streets in the historic centre of London. A centre for commerce when the current building opened in 1844, the Royal Exchange has been remodelled into boutiques and restaurants. Businesses in the area include investment banks, professional services, recruitment firms, IT businesses, and retailers. A selection of restaurants, cafes and bars are also within walking distance, providing options for meeting with clients or for workers to unwind.

South of Bank station on the London Underground network is Cannon Street. Once the home of candle-makers, the street is now at the heart of London's financial district. Overlooking St. Paul's Cathedral is 60 Cannon Street. The office building is situated close to the area's financial, commercial and banking firms. Along with offices from one to 12 or more desks, the site provides amenities that include reception services and meeting spaces.

North of Bank station is Austin Friars, another hub for offices in the area. Services offices are available for small and larger companies at 23 Austin Friars and 27 Austin Friars. Both office buildings sit conveniently between Liverpool Street station and the Bank of England. The refurbished buildings include private meeting spaces and contemporary offices.

London Office Space has office listings for a wide range of serviced offices, coworking, shared and private office space in Bank and throughout the City of London. The featured listings above represent a small selection of the currently available spaces. If you can't see the space you're looking for let us know what you're after and we'll find it for you.

Bank sits in the heart of the City of London's financial district. The area is served by the interlinking Bank and Monument stations of the London Underground and Docklands Light Railway (DLR). Named after the Bank of England, Bank station opened in 1900 and is the closest tube station to the UK's central bank. The adjacent Monument station is named after the Monument of the Great Fire of London and opened its doors in 1884. The pair of stations are served by the Central, Circle, District, Northern and Waterlook and City lines in addition to the DLR. This makes it one of the busiest points of the London Underground. Bank is located on King William Street, the financial centre of London.

The historic street was built between 1829 and 1835 and is named after King William IV. Just north of the street is Bank junction, a major confluence of several streets. Threadneedle Street, Cornhill, Lombard Street, mansion House Place, Walbrook, Queen Victoria Street, Poultry, Mansion House Street and Prince's Street all emanate from the junction. As a result, Bank is linked to several of the City's districts including Bishopsgate to the northeast, Blackfriars in the southwest, Cheapside to the west, and Moorgate in the northwest. Along with the Bank of England, the Bank junction is also the site of the Royal Exchange. Founded in 1565, the Royal Exchange is the City's commercial centre and its steps are often used to announce Royal Proclamations.

These shared and private offices in Bank are offered on flexible, competitive rental rates. The offices feature a comprehensive selection of facilities and services such as a manned reception with telephone answering, secretarial support, WiFi and broadband, meeting and conference rooms, telephone systems, central heating and air conditioning, car parking, bike racks, kitchens and showers, 24 hour secure entry, and more.

Browse the listings above for Bank serviced offices and shared space to rent with inclusive pricing, covering rent, business rates and facilities. In addition to the currently available office rentals listed, from time to time we are also able to offer offices to rent in other prime office locations in Bank, City of London. Fill in the Quick Quotes form or call now to speak to an expert 020 3965 9617.