We have a substantial portfolio of Camden Town office space to rent, along with experts dedicated to helping you find the ideal business location in Central London. Call us now on 020 3965 9617 or click on any of the listings below to learn more about the office space facilities, amenities and transport links. 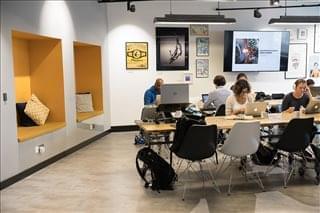 Work.Life's stylish workspace at 13 Hawley Crescent has hot desks, coworking spaces and private offices for freelancers, entrepreneurs and businesses of all sizes. Flexible terms mean you can pay as you go or opt for monthly packages for dedicated desks and private offices, depending on your needs.

A bright and open shared desk area includes comfortable places to meet and network, as well as lockers to securely store your... More info 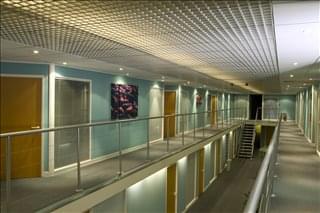 With 55 air-conditioned and furnished offices, the three-storey building at 85-87 Bayham Street offers serviced spaces for up to ten people. This is a great base for smaller businesses looking for a professional and supportive environment to grow and thrive.

A bright and fun lounge area provides a perfect spot to unwind and relax during breaks or network with other entrepreneurs in the centre. There is also a conference room,... More info 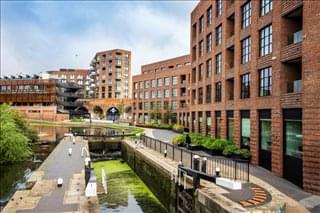 This exceptional area is home to 60,000 sq ft of coworking and serviced office space, as well as over 60 eateries and 200 new apartments. The aim of the project is to provide a socially immersive environment, in which like-minded people can network and work together. The work centre offers contemporary decor and sophisticated facilities, with a variety of workspace options. This includes dedicated working zones, private offices, break out... More info 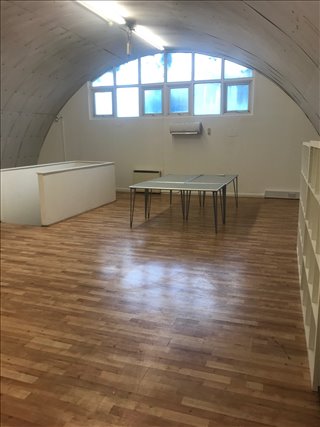 Only steps from Camden Road station, these serviced offices provide you and your employees with excellent transportation links close to the heart of Camden.

With gorgeous vaulted ceilings and large windows, this bright and contemporary office space is built under magnificent nineteenth-century railway arches next to Camden Road station. Since the rail line above the offices is no longer in use, this space offers you and your... More info 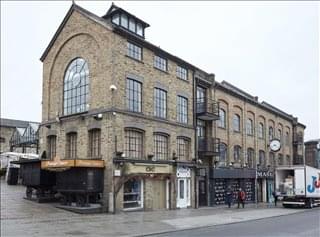 This original and historical building overlooks the iconic Camden Lock, an area with character and style which can help inspire new thoughts and ideas. This centre has been recently updated with meeting rooms, breakout areas and serviced office space to rent, which are well-equipped and designed to help grow your business. The offices are flooded with natural light and have a modern interior, which contrasts the history of this area, which... More info 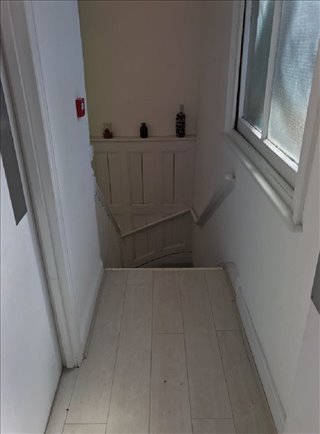 Available in the centre of Camden, close to Camden Town underground and Mornington Crescent station, is a number of offices built under the railway arches on Camden Road. Each office is slightly different and have a variety of different shapes, sizes and designs to suit your business. There is a main security door to the building, and unisex toilets for all staff to use. All of the offices come unfurnished, so you can create your own unique... More info 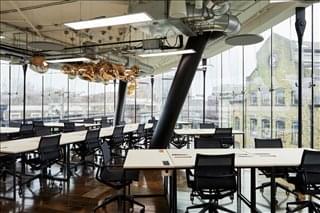 Situated in the heart of the eclectic Camden Market, this coworking solution delivers a fashionable and innovative business environment.

Stunning serviced office space to rent is on offer at the business centre, designed by DRS and Tom Dixon, providing enhanced functionality to help your business grow. Excellent supports and services are available across this 84,000 sq ft centre, which benefits from panoramic views and an amazing... More info 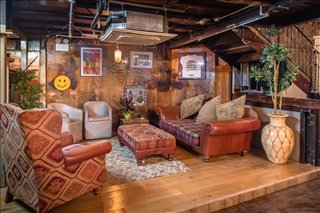 A unique, trendy office space located on Camden Road that boasts a vibrant interior design that will impress clients and colleagues alike from the moment they walk through the door. Comprising 3000 sq ft of stylish office space to rent, at a price inclusive of rates, VAT, gas, electric, and super fast internet, start ups or established businesses can hit the ground running. In addition, this secure space has CCTV and 24 hour building... More info 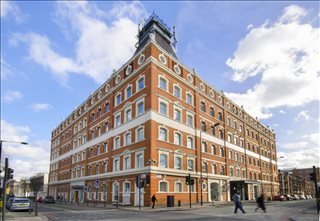 What was once a furniture depository has now been renovated into a high spec office, situated in a prime London location and offering a great destination for all kinds of businesses. Comprising of seven office buildings this office space boasts wooden floors throughout the complex, an abundance of natural light and lovely high ceilings, producing an atmosphere that will prove to be a pleasure to work in. The crown jewel of the centre is its... More info 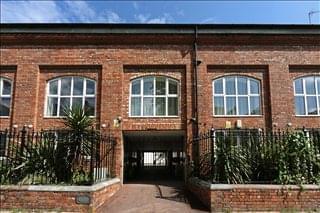 The Vineyards Business Centre offers newly refurbished and unbranded office space along with hot desks for rent in Camden Town. The contemporary offices benefit from air conditioning, breakout areas and good levels of natural light, creating comfortable and bright workspaces for you and your team. Spaces range in size from 125 sq ft to 400 sq ft.

Offices at the centre are available on short- or long-term leases, as well as... More info 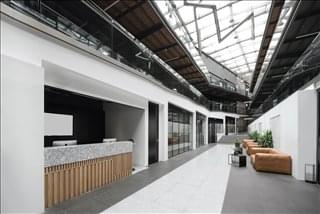 This centre is a contemporary piece of architecture, meaning tenants are able to work in a modern, fresh environment. Natural light floods through the floor-to-ceiling windows, brightening up the whole space. The centre offers a wide range of amenities such as; convenient meeting rooms for you and your business to work on your next business strategy. Shared coffee bars and kitchens are available for all tenants, creating a welcoming... More info 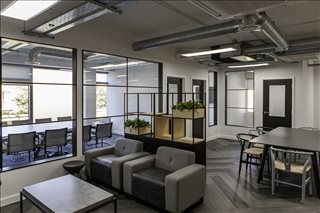 An open-plan office space beautifully designed to a high standard, encompassing comfort, style and efficiency. This self-contained office includes furnished 9- and 10-person meeting rooms, a private kitchen, dedicated breakout space and waiting area, and a telephone booth. There is no need to book a meeting room when the meeting room is dedicated to your company. There are two private meeting rooms within the office with crystal style... More info

Most of Camden's commercial activity is focused along Camden High St. The street also provides the largest number of business centres and serviced office spaces, and commercial property in general, which is often found in mixed-use buildings shared with retail outlets. There is also a pair of coworking facilities in Camden Town at The Atrium. Located at the Stables market, The Atrium is a state-of-the-art facility featuring an on-site restaurant, café, and gym.

A few yards away is the Triangle, a second coworking space spread over two floors. Both of these offices provide panoramic views from the heart of Camden and are operated by Interchange, a business accelerator that targets creative industries.

London Office Space has office listings for a wide range of serviced offices, coworking spaces and flexible hubs in Camden Town and throughout Central London, perfect for start ups or wherever you are in your business journey. The listings featured above represent a small selection of the currently available spaces. If you can't find a space to suit your exact business requirements, then please let us know and our commercial property experts will endeavour to connect you with the perfect office at a flexible rate.

Once an industrial area, Camden Town's main economic drivers are service industries such as tourism and entertainment. There is also a very important retail sector that is focused on street markets and alternative culture.

Starting at the end of the twentieth century, several retail and restaurant chains gradually moved into Camden Town, replacing independent shops. Restaurants offering various international dishes also thrive beyond market areas, including along Camden High Street and many of the side streets that splinter off from it.

A number of entertainment-related businesses invigorate the ever evolving entertainment and music scene of Camden Town, including music venues and hotels, which have also called the area home throughout the years. MTV's European headquarters has been based at the Breakfast Television House since 1993. Completed in 1981, this postmodern-style broadcasting facility was originally operated by TV-am. It is also known as the Eggcup House due to the presence of plastic eggcups on the roof.

The area is served by Camden Town, Mornington Crescent and Kentish Town Tube stations, providing links to Covent Garden, Liverpool Street London station and any other London City or United Kingdom locale. The area is also well connected by numerous bus routes, and St Pancras International and Euston Mainline station on the Victoria and Northern line are just a 15 minute walk away. Additionally, most of the office space to rent in Camden has secure bike racks and end of trip facilities, to accommodate cycling commuters. When finding serviced office spaces in Camden Town, you can rest assured all your travel and commuting needs will be easily accommodated by the excellent transport links of this premium central London business location.

Camden Town offers a mix of underground and alternative cultures with popular street markets, music venues and pubs. This politically charged area of north London is reflected in anarchist meeting spots and social commentary on building facades. Punk, emo, goth and other alternative cultures have all found a home in the area.

Camden Town is the central neighbourhood of the London Borough of Camden. Created as a residential area in 1791, Camden Town was part of the Kentish manor and became a central location for the capital's canals and railways including Regent's Canal.

Camden's now famous markets opened in 1973 and currently serve to attract visitors from around the world. The markets include the Lock Market, the Stables Market, Camden Lock Village, and the Buck Street Market. Inverness Street Market is the oldest of the markets and has been selling food for more than a century.