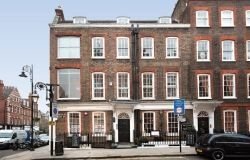 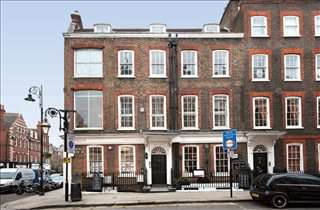 Known for its architecture and links to the arts, Hampstead is a picturesque base for doing business away from the hustle and bustle of Central London. Office spaces at this recently refurbished property retain many beautiful features, from wooden beams and flooring to exposed brick walls. Private offices with one desk and shared spaces with multiple workstations are designed with small businesses in mind. Fully furnished offices are... More info 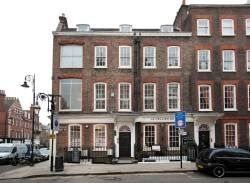 Luxury serviced offices in this red brick period building at 28 Church Row, Hampstead, London NW3 6U include contemporary suites for up to four workstations. Short-term and flexible agreements are available with inclusive pricing, giving you the option to quickly adjust your space depending on your business needs. 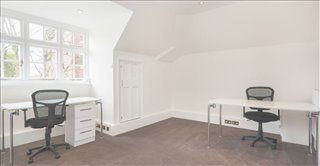 Brand new luxury serviced offices, located in the prime area of Hampstead. These high quality office suites are ready to move into from 1st July 2019 and there is a range of space available. The rent is inclusive of all utilities, insurance and business/council rates, making the move very easy for the tenants. The work centre has a range of facilities on offer, this includes; vibrant break out areas, daily cleaning service, customised... More info

Hampstead's largest employer is the Royal Free Hospital, a major teaching hospital and member of the University College London (UCL) Partners academic health science centre. The residential area is also the base for many small businesses.

Creative industries in particular thrive in Hampstead, which is known for its artistic character. Jim Henson's Creature Shop was based in the area until it was relocated to California. Sir George Martin's Associated Independent Recording (AIR) studios still operates in Hampstead at a converted church on Lyndhurst Road. The independent recording company was founded in 1965 and has been based at Lyndhurst Hall since 1991. The Grade II listed building was originally the home Lyndhurst Road Congregational Church.

Hampstead High Street and Heath Street form the commercial heart of the area. Restaurants, a cinema, shops and other businesses line both streets to create a village atmosphere.

Office accommodation is found throughout Hampstead High Street and Heath Street, as well as adjoining streets. Spaces are typically in mixed-use buildings and often above ground-level retail outlets. Examples include Hillsdown House at 32 Hampstead High Street. Most spaces are designed for small businesses who need offices for a handful of workstations or less.

The Hampstead Design Hub is a co-working option in the area with offices for freelancers and small companies in creative industries. Up to 20 hot desks are available, along with a meeting room for up to ten people. Other amenities include storage lockers, printing facilities, a stocked kitchen, two breakout spaces, and a reception area. The Hampstead Design Hub is close to Swiss Cottage tube station at 39 Fairfax Road in South Hampstead.

The area is served by numerous transport links, such as Hampstead Station (Northern Line), which is between Golders Green and Belsize Park stations. Additionally, buses interconnect the area throughout London.

Hampstead is a creative and leafy community within the London Borough of Camden. It is known for its artistic, intellectual, musical and literary scenes. The Victorian-era Hampstead Library and Town Hall have been converted into the Camden Arts Centre, a creative industry hub since 1965. The Grade II listed property is located at the corner of Arkwright Road and Finchley Road.

Other attractions in Hampstead include Fenton House, the Freud Museum, Keats House, Kenwood House, and the Hampstead Museum at Burgh House. Hampstead Health is a large park covering 790 acres on one of London's highest points.

Hampstead is home to several examples of Modernist buildings, including 1-3 Willow Road. Designed by Erno Goldfinger and completed in 1939, 2 Willow Road is open to the public and includes a collection of twentieth century art and Modernist furniture. Completed in 1934, the Isokon building on Lawn Road was an experiment in minimalist urban living. It is designed with curved lines and resembles the exterior of an ocean liner. The Grade I listed building is the site of a public gallery space and has been refurbished as flats operated by the Notting Hill Housing Association. There are also more millionaires within the borders of Hampstead than in any other area of the United Kingdom