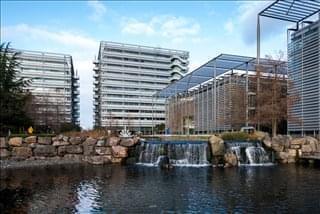 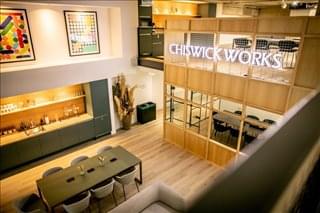 Opened in Summer 2021, this brand-new space offers serviced offices, coworking space and private offices on flexible, competitive rates. The centre allows 24 hours access in 7 days out of every week, and additionally features air conditioning, meeting rooms, bike racks, and high speed Wi-Fi accessible all throughout the building. There are also kitchen facilities, lounges and breakout areas filled with natural light where clients can take a... More info

Why You Should Rent Chiswick Park Office Space

Over the years, and due to the strategic advantages the area offered to businesses, Chiswick Park has been home to large companies and institutions, from the IBM headquarters and the British Standards Institution to numerous other leading companies in sectors such as entertainment, oil and gas, and food and beverages.

One of the most notable recent trends involves the growth of the number of local companies involved in the TMT sector (technology, media, and telecommunications), which has emerged as an important occupier of business centre space and serviced offices in the Chiswick Park area.

In addition to excellent transport links, Chiswick Park is a good choice for businesses due to its affluent resident base, stable rental costs, and village-like feel, a far cry from the busy atmosphere of other London neighbourhoods.

Chiswick Park, Stamford Brook, Turnham Green, and Gunnersbury tube station all provide underground services to the area while Chiswick, Gunnersbury and South Acton mainline rail stations offer National Rail services including London Overground. Chiswick Park tube station, located conveniently close to Chiswick Park itself, provides District line services to Hammersmith station, and then onwards to central London. Acton Central, Acton Town and Ealing Common tube station are also nearby and provide services on the District and Piccadilly lines. For those who prefer to drive, Chiswick is bisected by the Great West Road and the M4, so travel and commuting around South West London and beyond are easily facilitated. In addition, many bus routes near Chiswick Park offer easy access to the vast majority of London, so you can rest assured your serviced offices will be well connected.

Chiswick is part of the Western Corridor office market, a district which has approximately 3 million square feet of serviced offices, much of which is in the Chiswick Park area. Until relatively recently, office spaces in Chiswick Park were mostly available in low-rise buildings, and it was mainly categorised as Class B space.

Conversions of warehouses and industrial properties into office spaces began in the 1960s and has since involved a handful of iconic heritage buildings, such as Sanderson Factory on Chiswick High Road, which is now used as a business centre offering small-sized office units and office studios. This building is considered a pioneer in the shared workspace sector, since it was the first office workspace to accommodate multiple small business that shared access to common amenities back in the 1970s.

One of the most important office developments near Chiswick Park underground station is the business park that shares its name with the area. This business park is a 33-acre complex offering approximately 1.4 million sq ft of serviced offices, large green areas, and plenty of lifestyle amenities. This award-winning office development has received multiple accolades over the years and is used as the national and international headquarters of many corporations. In total, more than 65 businesses have their offices here.

While in past decades most offices were located in commercial areas like Chiswick High Street, around Gunnersbury underground station, and north of the local town hall, the development of the Chiswick Park complex changed the situation considerably, resulting in a highly sough-after location that is expected to become one of the largest office hubs in the borough of Hounslow in the future.

These shared and private offices in Chiswick Park are offered on competitive rental rates with flexible lease terms, in a variety of sq ft configurations to suit the unique needs of your business. In addition, the vast majority of office buildings feature a comprehensive selection of facilities and services including: administrative and secretarial support, fast Wi-Fi and broadband, meeting rooms, conference room facilities, a roof terrace and business lounges, central heating and air conditioning, car parking, bike racks, kitchens, secure 24 hour access, and on site management teams.

Browse the listings above to find serviced offices, private offices and shared spaces to rent in Chiswick Park, complete with all-inclusive pricing that covers rent, business rates amenities, and facilities. Fill in the Quick Quotes form or call us now on 020 3965 9617 to speak to a commercial property expert.