Our Greater London office search service is completely free to use, and our advisors are on hand to go that extra mile in helping you to find the perfect office space to rent in Richmond, at cost effective rates. No matter what property type you need, we offer a comprehensive range of Richmond offices to rent, from creative business centre facilities, serviced office space hubs, shared workspaces and short term rentals for start ups, to industrial spaces, warehouses, and conventional commercial property leasing. 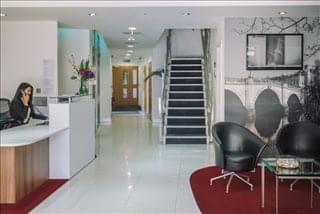 Oriel House is a modern building offering spectacular serviced office spaces and meeting rooms to rent flexibly in Richmond upon Thames. With warm décor, 24 hour access, air conditioning and contemporary furnishings, the building is also conveniently close to both Richmond Train Station and the scenic banks of the River Thames. Well-lit and fully furnished private offices and coworking spaces are available on flexible terms for... More info 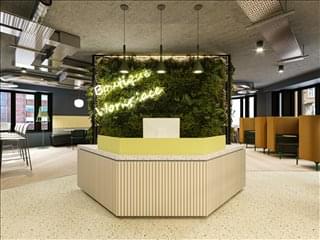 Sovereign Gate is a newly-refurbished five-storey building in the heart of Richmond town centre in south west London. Inside, there is over 24,000 sq ft of private offices, meeting rooms and even a roof terrace, spread across each immaculately renovated floor, including a show-stopping ground floor coworking membership lounge. All serviced office spaces have air conditioning and are designed to be highly functional, conveniently flexible,... More info

Serviced offices, meeting rooms and shared flexible workspace in Richmond can be found in a variety of commercial premises and property types, particularly on and around George St. Additional hotspots include Quadrant and adjacent streets, such as Sheen Road. A wide selection of west London offices located in the Borough of Richmond upon Thames can be found above, surrounded by a variety of shops, restaurants and pubs.

Spencer House, located at 23 Sheen Road, and Parkshot House on 5 Kew Road also offer a variety of modern office solutions. Parkshot House, often occupied by companies in the healthcare, communications, and legal sectors, provides spacious offices that are complemented by meeting rooms, breakout areas and a variety of other sought-after amenities.

Richmond is a major commercial centre SW of central London. Retail is a major economic driver for the town, which serves as a well-established destination for up-market shoppers. The town centre's retail district is primarily focused on George Street, Quadrant and Hill Street. Among the town's more than 200 shops are major stores such as Boots, House of Fraser, Marks & Spencer and Whole Foods.

Due to its proximity to central London, Heathrow Airport and the M4, Richmond is home to several head offices for national and international companies. The technology sector is among the strongest sectors in Richmond, although the town attracts businesses for various sectors. PayPal, eBay and The Securitas Group are just some of the multinationals with UK and European offices in Richmond.

Richmond is an attractive suburban town within the London Borough of Richmond upon Thames. Central Richmond is close to several popular attractions, including Hampton Court Palace and Kew Gardens. The area was established with the construction of Richmond Palace during the sixteenth century by Henry VII. The palace lends its name to the town, which is where Elizabeth I spent her last days.

The Thames is a major draw in Richmond, particularly around Richmond Bridge. The riverfront is home to numerous footpaths, as well as several bars and restaurants, many of which are housed in Georgian-style buildings. Richmond Green is one of the most beautiful urban green spaces in England, having hosted sporting events since at least the sixteenth century, when archery contests and other tournaments were organised.

The Poppy Factory is also found at Richmond Hill, where disabled former service men and women produce Remembrance Day poppies each year. This area is also the site of the former Royal Star and Garter Home, as well as the entrance to Richmond Park, a national nature reserve and the largest of London's Royal Parks.

Perks of Serviced Offices to Rent in Richmond, London

Richmond Station on Kew Road is also a short walk from most of the serviced offices in central Richmond and is served by South West Trains, linking Richmond with North Sheen, Reading and London Waterloo. Richmond is also the terminus for the Underground's District line and the Overground's North London line.

As for additional transport links, most shared workspaces and serviced offices in Richmond upon Thames are within short walking distance of Richmond station. Nearby as well are St Margarets, North Sheen railway station and Kew Gardens tube station, providing links to Reading, Waterloo and Charing Cross stations. In addition, Heathrow Airport can be easily reached by road or from the nearest train or tube station. Additionally, Richmond is serviced by numerous bus routes, and most serviced offices have access to a car park, so you'll always have a choice in how you commute.

Browse the listings above to find a range of flexible offices with all-inclusive pricing that covers rent, business rates and facilities. Fill in the Quick Quotes form or call 020 3965 9617 now to speak to an expert.