Take a look at our Ealing office space to rent, available on flexible terms, including executive suites, serviced offices and equipped modern offices benefiting from a fully furnished packages. We also have coworking spaces and shared workspace, conventional commercial property, desk rental, warehouse space, short term office space to rent available with air conditioning and flexible easy in/easy out options, private offices, meeting rooms, and virtual office opportunities. Our easy to use, London office space search service is focused on finding you the ideal serviced office space or coworking hub at competitive rates. Call us now and talk to one of our commercial property experts about the wide array of offices for rent in Ealing, London. 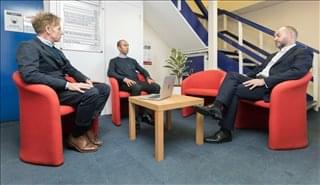 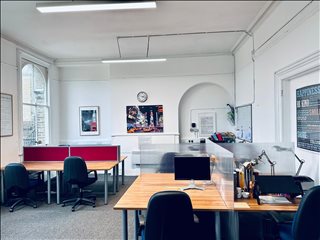 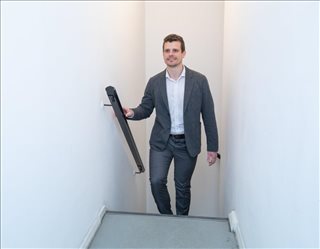 Competitively-priced office spaces ranging from 125 to 540 sq ft are available to rent at this mixed-use development. The optimal location benefits from great transport links with the nearby West Ealing and Hanwell stations and being only a 5 mile, 15 minute drive from Heathrow. There is also car parking, meeting rooms and 24 hour access to the building, which is monitored with CCTV and alarmed security systems, as well as on-site security... More info 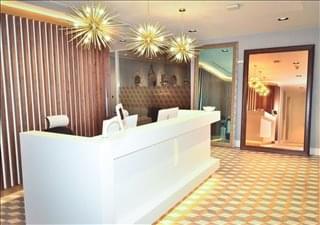 This impressive, high-spec business centre on Uxbridge Road, provides contemporary, interior-designed work space in a variety of sq ft configurations for 1 to 30 people. The serviced offices and coworking space have been fitted out to an exceptional standard with high-quality fixtures and fittings. Air conditioning, meeting rooms, break-out areas, and a business lounge with complimentary refreshments are available, plus shower facilities,... More info 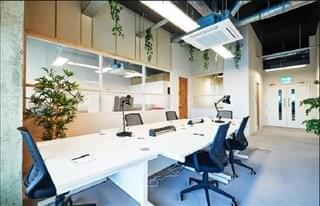 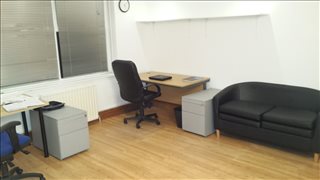 This business centre is based in Ealing, adjacent to the famous Ealing Film Studios, and is housed in a prestigious Georgian building that boasts its own grounds and courtyard car parking. The centre's serviced offices and coworking space offers a wealth of amenities, including meeting rooms that are equipped with projection screens, presentation boards and a TV, air conditioning, kitchen and washroom facilities, childcare, reception... More info

Ealing's strength lies in its strategic location between the West End and Heathrow Airport. This economic position has helped attract businesses from a variety of sectors. Major companies and employers with operations in the district include Carphone Warehouse, Ealing Hospital, GlaxoSmithKline, Kellogg, The Tetley Group, United Biscuits, and Walkers in South Ealing.

The commercial heart of Ealing is found close to Ealing Broadway station, particularly along The Mall, Ealing Common, The Broadway and New Broadway. Ealing Broadway Shopping Centre has more than 80 shops and restaurants.

The film industry is one of Ealing's primary sectors. Opened in 1902, Ealing Studios is among the oldest in the world and the oldest continuously working studio. Many films were produced in Ealing, including Notting Hill, Shaun of the Dead and The Importance of Being Earnest.

Older comedies such as Kind Heats and Coronets, The Ladykillers, Passport to Pimlico, and The Lavender Hill Mob were also filmed at Ealing Studios. Downton Abbey and Doctor Who have also been shot at the studios, where the Met Film School London also has a campus.

Office space to rent in Ealing is focused along The Broadway, New Broadway, Hanger Lane, Ealing Common, South Ealing and Uxbridge Road, as well as a large concentration just outside SE Ealing at Chiswick Park. The serviced offices, private offices and coworking spaces in Ealing are housed in a variety of property types, and have all the premium amenities and fit-outs to ensure all your business operations are supported. Most of the office space to rent in Ealing and South Ealing come with meeting rooms, air conditioning, private phone booths, fast Wi Fi, kitchen facilities, bike racks, 24 hour secure access and car parking as standard. There are a variety of space options available, too, in tailored sq ft configurations to suit your unique business requirements. Private offices and shared workspaces in Ealing and South Ealing often come with additional amenities as well, such as reception and administrative services, IT support, mail handling and onsite management, all on flexible terms - so you can just concentrate on growing your business.

The arrival of the Queen Elizabeth Line as part of the Crossrail project improved connections from Ealing Broadway station to Heathrow Airport, Canary Wharf and the City in 2018. Regeneration around the station has brought new residential developments to Ealing, as well as improved office accommodation, including serviced offices and private offices with meeting rooms in business centre settings.

Due to the economic downturn in recent years, much of Ealing's office stock has been vacant. This has led to workspaces being demolished or replaced with residential units.

Like other parts of Ealing, Uxbridge Road is seeing a significant transformation and renewal. A number of new hotel developments have been built along the corridor since 2009, including Travelodge and Premier Inn properties.

Revitalisation in the area has removed some office buildings, including Westel House at 32-38 Uxbridge Road. Once the tallest building along Uxbridge Road, it was demolished and replaced with an Ibis Styles Hotel and two residential blocks. At the same time, Ealing Cross at 78-89 Uxbridge Road has introduced 135,000 square feet of modern Grade A office space and floor plates of around 18,000 square feet.

One of Europe's largest industrial estates is Royal Park, which is shared with the London boroughs of Hammersmith & Fulham and Brent. The sprawling site to the north-east of Ealing is a major hub for small businesses. Most of the companies at Park Royal employ less than 50 people. Central Middlesex Hospital and over 1,200 companies are based on the business estate, including about 500 food production businesses.

Your offices in Ealing will be conveniently close to a number of major transport links that service this bustling West London residential and commercial centre. Ealing Broadway train station is in the centre of town, which provides services on the Elizabeth line and GWR, and West Ealing and Ealing Common stations are also nearby. North Fields and South Ealing station also service the area, providing train commuting and travel to central London on the Piccadilly line. Numerous bus services cross through Ealing, especially focused around the University of West London, Ealing Common and Ealing Green, and all of these transport links work to provide easy access from your serviced offices to nearby Heathrow, central London and throughout the United Kingdom.

Ealing is a major suburban area and metropolitan centre in west London. The district is within the London Borough of Ealing and is its administrative centre. Once a rural village in Middlesex, the area changed dramatically with the arrival of rail in 1838. Ealing evolved from an area with market gardens supplying London during to a suburban commercial and residential hub starting from the nineteenth century. Villages within the district gradually merged as residential areas grew and removed natural boundaries.

Landmarks in the district include the historic Ealing Town Hall on Ealing Common. The Grade II listed Victorian building was originally built in 1887 and expanded in 1930. Another fine architectural wonder in Ealing is St Peter's Church. Built between 1892 and 1893, the church combines Arts and Crafts with late Victorian Gothic styles.

Ealing also hosts several festivals through the year. The largest and most popular is the annual Beer Festival. The event showcases more than 200 real ales each July. There are also annual festivals celebrating blues, comedy, jazz and opera.