Rent flexible office space near the Strand - these private offices and shared workspaces are available now, fully furnished with all inclusive pricing and great amenities. Call 020 3965 9617 to speak to a West End specialist or have a look at the featured properties below. 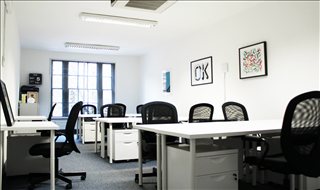 This exceptionally well placed business centre at 146 The Strand houses a collection of self-contained office suites, fully furnished and equipped to a very high standard, providing everything your business needs to move in immediately. Large windows let in plenty of natural light and offer a pleasant working environment.

We have a substantial portfolio of WC2 office space for rent, and experts dedicated to finding you the ideal business location near the Strand and throughout the Central London's West End. Whether it be serviced offices, flexible rentals, short term space, hot desking, freelance friendly shared workspaces, commercial units or virtual office solutions - we can help you find the ideal spot to set up shop and get busy working right away.

Business in the Strand

Once the home of mansions built by aristocrats before the West End became the fashionable place to live, the Strand evolved into a place for entertainment. During the seventeenth and eighteenth centuries, taverns and then coffee houses were established on the street.

The eighteenth century also saw the arrival of several printers and publishers, which helped established the Strand as the hub for the British book trade. More recently, the street has several tourist and luggage outlets. There are also a number of dealers specialising in old postage stamps.

The Strand is also notable for education and justice. The Strand Campus of the King's College London is located next to St Mary-le-Strand church. Designed by Robert Smirke, it was built between 1829 and 1831.

The King's College Hospital has also been located on the street since 1840, although it has been part of the University of London since 1908. King's College London also operates from Strand House, Bush House and other nearby buildings in the Aldwych Quarter. The Royal Courts of Justice is also found on the Strand

The Strand has been the home of Charing Cross railway station since 1864. The station is a major gateway for commuters travelling into Central London. Embankment, Covent garden and Temple tube stations are all within a ten minutes walk and bus routes also offer regular connections.

Strand, or the Strand, in the City of Westminster is a three-quarter mile long street running west the heart of Central London. The major thoroughfare runs from Trafalgar Square towards Temple Bar in the City of London, where it becomes Fleet Street. The road's name is from the Old English word "strond", which means the edge of the ridge.

Historically, the Strand ran along the north bank of the River Thames. It was a popular residential area for the upper classes including bishops and courtiers who built large mansions and palaces between the Strand and the river from the twelfth to seventeenth centuries.

After the aristocracy moved to the West End during the seventeenth century, the Strand became the home of coffee shops, taverns and restaurants. Theatres and music halls emerged during the nineteenth century, and many venues still stand to this day. Poets, authors and philosophers have called the Strand and nearby addresses home, including Charles Dickens and Virginia Woolf.