We have a substantial portfolio of serviced offices in East London, with experts dedicated to finding you the ideal property type and location. Whether it be private offices, flexible rentals, short term space, hot desking, freelance friendly shared workspaces, or private offices - we can help you find the ideal commercial properties to rent. Search the available offices below or call us on 020 3965 9617. 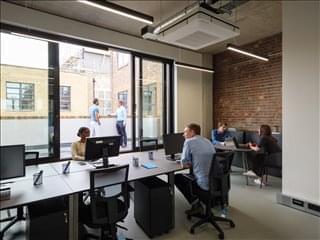 A stunning office centre comprising 94 modern offices and studios over four-floors in a highly sought-after Hackney location. This flexible office allows you to scale up or move as your business grows. Each detail has been included to meet the demands of your modern business. The space is filled with natural light and boasts a sleek and stylish interior design. Members have access to modern meeting rooms, an on-site cafe, breakout areas,... More info 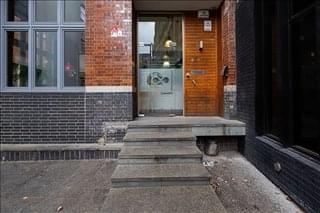 Based in London's thriving design district, Clerkenwell, this is a light and airy warehouse workspace overlooking the historic Smithfield market. With an impressive entrance and large floor to ceiling windows, the space has all members need to be clients most productive self, with breakout spaces, standing desks and private phone booths for private conversations, and 4 meeting rooms (2 per floor). The warehouse workspace is divided between... More info 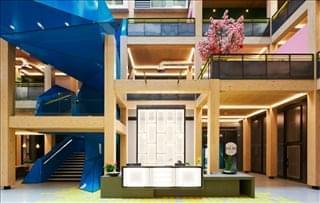 This listing offers high quality studio office space, situated within easy reach of public transport links and great local amenities. There are a range of studio sizes available, ranging in size from 1,905 sq ft to 4,833 sq ft, suitable for teams any size up to 76 persons. The all-inclusive studio spaces have a wealth of fantastic facilities, including; fibre optic internet connection, access to high quality meeting rooms, friendly on-site... More info 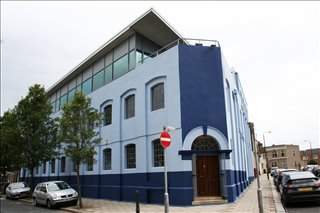 This vibrant workplace located in Plaistow offers office spaces with a contemporary design and exposed brickwork. There are bike racks on-site, and the space is perfectly located for local transport links, making the commute quick and easy. Here, you will get access to a shared kitchen area, the gym below, a boardroom, professional meeting rooms, shower facilities and a film studio complete with lighting equipment and a green screen.... More info 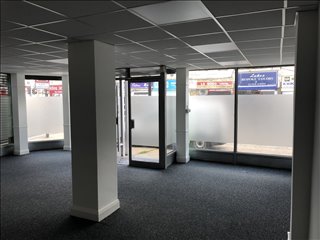 Based in Plaistow, this centre offers professional workspace that would be ideal for small to medium sized businesses looking for a new home, with the space being suitable for teams of up to seven. Tenants will have 24 hour access, allowing you total control over your work schedule. You can ditch the traditional 9 till 5 if desired and stay late if work requires. The space comes furnished and is unbranded, allowing you to stamp your... More info

Why You Should Rent East London Office Space

East London is a vibrant business and economic hub in the UK's capital, enjoying rapid growth across a variety of industries and improved infrastructure, along with an increase in highly skilled workers.

Some of the tallest buildings in Europe are found along Canary Wharf's iconic skyline. The tallest is One Canada Square, a 771-foot skyscraper completed in 1991 and the second tallest building in the United Kingdom. Major office towers in Canary Wharf include 8 Canada Square, a skyscraper built in 2002. One Churchill Place is the headquarters for Barclays, while J.P. Morgan has its European headquarters at 25 Bank Street.

Stratford's office options continue to grow at Queen Elizabeth Olympic Park. Here East is an emerging hub for creative, digital, technology and media businesses centres around the former Olympic Press and Broadcast Centre. The site is equipped with some of the best data and connectivity infrastructure in Europe. With 227,200 sq ft of flexible Grade A office accommodation, the Press Centre has spaces of between 13,300 and 139,805 square feet. The Broadcast Centre has 661,000 sq ft of spaces of between 4,731 and 159,658 sq ft.

Former warehouses and factories have been transformed into modern offices throughout East London, helping to preserve the area's industrial heritage while providing high spec contemporary business space. Examples include the Tea Building, which was originally the site of the Lipton Tea factory. It now has 268,600 square feet of high-quality offices as well as a hotel and private members club.

East London refers to a large area east of Central London and north of the River Thames, including the East End of London on the eastern fringe of the ancient walls of the City of London.

The area includes six of London's modern boroughs, including Barking and Dagenham, Havering, Newham, Redbridge, Tower Hamlets, and Waltham Forest. A large part of the London Borough of Hackney is also within East London including Shoreditch.

History: The historic heart of modern-London is the East End, which developed during the Middle Ages outside of the ancient city walls. Much of the development focused on old Roman roads, particularly from Bishopsgate and Aldgate.

Industry: Industry fuelled further development eastward from the start of the eighteenth century. Much of the area's early industry depended on the River Thames, and several docks were built in Tower Hamlets and neighbouring areas.

Browse the listings above to find our range of East London workspaces to rent, with all inclusive pricing that covers rent, business rates and facilities. If you're looking for East London coworking space we can help you find shared workspaces and desk rentals to suit your unique business requirements.

In addition to the currently available office space to rent, we also have other commercial properties in East London and flexible, serviced offices available for rent in other prime locations throughout Central London. Fill in the Quick Quotes form or call 020 3965 9617 to speak to one of our experts about the shared and serviced office facilities available to rent in the area.